Starting at the Geophyiscal Lab 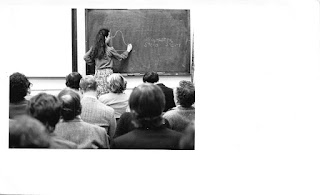 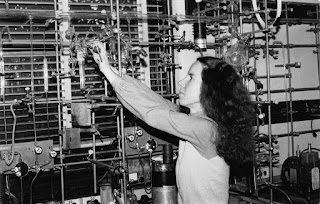 Every summer, the esteemed Dr. Tom Hoering from the Carnegie Institution of Washington’s Geophysical Laboratory would come to the Marine Science Institute in Port Aransas on “vacation” which generally consisted of him hanging around the lab and chatting with the graduate students and postdocs. Hoering was the major professor of my major professor, Pat Parker, making me Hoering’s academic granddaughter. Tom had a thick head of grey hair, sharp blue eyes, and facial expressions that let you easily know what he was thinking about you. He was one of the earliest pioneers in the field of stable isotopes carrying out studies as varied as measuring nitrogen-fixing bacteria to ammonia formed by lightening strikes. Not only was he carrying out studies on his own, but also he built his own mass spectrometers, one reportedly out of old, used automobile parts. When he came to Port Aransas, we grad students were on our best behavior.
The summer before I graduated, he stood in the hallway and quizzed me informally about my work and my findings. At the end of the conversation, he remarked that the Geophysical Laboratory might be an excellent place for me to consider for a postdoc. I was thrilled! As the year went by and I wrote up my work, I applied to two places: University of Georgia to work with Clanton Black, a noted plant physiologist who dabbled in stable isotopes, and the Geophysical Laboratory of the Carnegie Institution of Washington. I received offers from both, and it was a fairly easy choice to go to Washington, DC, and work on hydrogen isotopes with Tom Hoering.
Many people are not familiar with the Carnegie Institution of Washington. The financier, railroad man, and founder of US Steel, Andrew Carnegie, donated $22 million dollars in 1901 to found a basic research institution dedicated to a small, select group of scientists who were provided a full salary and ample support to study questions that they felt were most important. Carnegie’s Presidents were all distinguished men; for most of its history, the senior staff scientists, called Staff Members, were also only men. The Geophysical Laboratory was formed some years later (1906) and the first building constructed on a hilltop in upper Northwest Washington, DC, one block off of Connecticut Avenue on Upton Street. The US Geological Survey at that time was on a campus across the street directly on Connecticut Ave. In the early 1900s, the nation’s capital was the center of geological research in the United States.
Several leading scientists and Nobel Prize winners did their awarding winning research at the Carnegie including Edwin Hubble (discovered the expanding universe); Charles Richter (developed the earthquake measurement scale), and Barbara McClintock (early work on genetic inheritance). A postdoctoral fellowship at the Carnegie meant that you were running with the Big Dogs, particularly in the field of earth science and geochemistry. It was well known that a postdoc at the Carnegie could land you a prestigious position at a good university after you finished.
The Geophysical Laboratory was the polar opposite of the Port Aransas Marine Lab in almost every way. In Texas, I came to work in shorts, a ragged T-shirt; shoes were optional. At the Geophysical Laboratory, shorts were out of the question. I needed to purchase a week’s worth of “work” clothes—khaki pants, blouses, and decent shoes. The staff scientists at that time were all men, who came to work wearing ties and white shirts. The halls of the lab were quiet; the average age of people I saw on a regular basis was about 50. They were all geochemists; I was the only biologist. The desk I was assigned was once occupied by “Mrs. Navrotsky”, who I later learned was Dr. Navrotsky, a never married and very distinguished geochemist. I required a sterile environment to do culturing work, so a small plywood “hood” was constructed for me in Tom Hoering’s back lab, which I shared with Doug Rumble and a fuming, BrF5 -oxygen isotope extraction line.
at August 03, 2019