In 1991, Beverly Johnson, then a Ph.D. student with Gifford Miller at the University of Colorado, came to the Geophysical Laboratory for several months to pilot a study on stable carbon and nitrogen isotopes in fossil and modern flightless bird eggshells (e.g., ostriches and emus). The work turned into her Ph.D. dissertation and began a 28-year project that I have continued with Miller. Beverly managed to locate eggshells from farm-raised ostriches in the United States, along with their ostrich chow diet (Johnson et al. 1998). She also field collected ostrich eggshell from South Africa to calibrate the carbon isotope differences between diet, carbonate, and organic shell proteins. Her work on Equus Cave, South Africa, determined changes in vegetation, rainfall, and temperature over the last 17,000 years (Johnson et al., 1997).
As this work was being completed, Miller was starting a collaboration with John Magee and others at the Australian National University in Canberra. Emu eggshell and eggshell fragments from the extinct fossil bird Genyornis were plentiful in sand dune deposits throughout much of the arid interior of the Australian continent. Genyornis was a two meter high flightless bird endemic to Australia.  Beverly, now a postdoc, Giff, and Magee joined my family for my first trip to Australia in 1994. My son was 3 years old and just recovering from a nasty round of chickenpox. My daughter, 7 years old, was very interested in animals and plants. My husband served as driver, campsite manager, babysitter, and principal ornithologist. We traveled from Adelaide, in Southern Australia, all the way north to Kakadu National Park, almost in Darwin, NWT, and then back again, a ~6,000 km roundtrip. All of the fieldwork was in remote regions of the Outback where we pitched a tent and prepared meals over a campfire. I collected plants and soils along the transect, learning to identify new species in the different regions of the continent.
That first year we learned a lot about traveling, camping, and doing fieldwork in Australia. When my family split off from the seasoned team led by Giff and John, the sense of adventure was high! Set loose on an entirely new continent with a vehicle that could go anywhere, we took off on the Oodnadatta Track towards Alice Springs. Our first night was spent in a small caravan park in our tent. We ate a canned beans for dinner and called it a day. Around midnight, we were awakened by loud voices and shouting from the adjacent Aboriginal community—our first subtle lesson on how this group gets along in Australia.
We reached the outskirts of Alice Springs in a couple days again setting up a camp with just our tent, no chairs, no tables, no pillows, no nothing. Looking around the caravan park, properly dressed older couples were having afternoon tea on a table laid with a flowered cloth, china teapot, and real teacups. They were seated on sturdy folding chairs in the shade of a gum tree, well out of the red dirt carpeting the caravan park. The next day we drove into Alice to the K-Mart in town and purchased a small folding table, two chairs, some pillows, and proper plates and cups. We stopped off at Woolworth’s supermarket and picked up fresh lamb chops, onions, and meat pies, along with a slab of beer and several bottles of decent red wine. Quickly, we learned that the men take the meat and onions to the Barbie, chat with each other as they cook, and the women remain in their camp with the children.
As we wound our way to the Top End, we experienced social norms very different than those in the United States at that time. For example, it was surprising to almost everyone that I was the scientist leading the trip, not my husband. In the town of Daly Waters, we attended a comedy show in a restaurant and heard many racist and anti-gay jokes. In Aboriginal communities, we saw poverty, alcoholism, and segregation typically with a white couple running the show through the local gas and food store. The availability of fresh food in the Outback was minimal—frozen kangaroo tails were considered a delicacy. Chips (French fries), sweets, and white bread (also frozen) were about the only groceries available to the community. 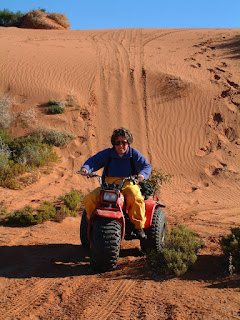 Email ThisBlogThis!Share to TwitterShare to FacebookShare to Pinterest
Labels: Australian Adventures and Science