Gut Microbes: from their "rump" to your muscle


Every 17 years around Washington DC, millions of 1-2 inch long insects crawl out of small holes in the ground that they’ve dug, metamorphose into giant cicadas then fly into windows, smash onto car windshields, carpet sidewalks, and generally make a sensational showing. These are the 17-year cicadas, species Magicicada [some refer to these as locusts, but they're not], one of the most understudied insects because it can only really be investigated every 17 years. 2004 was the last eruption of this brood of insects in the east. They’ll be back out next year, 2021!

Geophysical Lab summer intern Hilary Christensen was a young biology major from Carleton College and fit the bill for someone to take the lead on using stable isotopes for studying the diet and nutrition of these small beasts. Our study plan was to collect specimens in two locations—the grounds of the Lab and Hilary’s hometown in Pennsylvania. She sampled seven specimens in each spot, as well as leaves from nearby trees, that most likely hosted the locusts underground for the past 17 years. She also collected 50 wing samples in each location from newly expired cicadas that died after a very brief mating period.

Magicicada cicadas survive on xylem fluids—the fluid found in a plant’s vascular system that brings water from the roots up to the branches and leaves. They do this while surviving deep underground, associated with just one tree, for 17 years! But they have a major nutritional problem. Xylem fluids, which we measured, don’t have a full complement of the amino acids needed to build the cicada’s body. In particular, the xylem fluid we measured lacked several essential amino acids, those that animals can’t make themselves and must get from their food. How were they surviving on this minimal diet for 17 years?

Many insects have a similar problem because they eat leaves with low protein amounts or like the cicada have inadequate food sources. They get by, and do so with great vigor, by hosting microbes in their guts that convert xylem fluids or leaf material into amino acids that are then used by the organism to build structural tissues. When Hilary and I analyzed the amino acid isotope patterns in the cicadas, they did not match with amino acids from leaves taken from area trees, and several weren’t present at all in the xylem fluid. 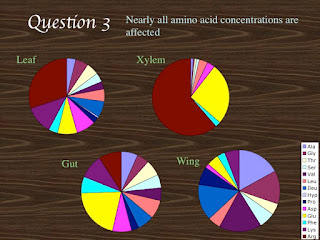 We concluded then that gut microbes supplied all of the cicadas’ essential amino acids--valine, isoleucine, and lysine--as well as significant portions of the other amino acids. It took us 7 years to publish the work. By that time, I’d thought further about this with postdoc Seth Newsome. We were developing a collaboration in 2008 with Carlos Martinez del Rio, an ecologist from the University of Wyoming with a specialty in combining ecology with physiology.

When the data was collected and the results inspected, we were surprised to see that in no case did the essential amino acids have the same isotope patterns as their diet. At low concentrations of dietary protein, 50-70% originated from another source—the microbes in the tilapia’s guts. With very high protein diets, even then bacteria were producing 10-20% of the essential amino acids. We wrote the paper, as we all do, with the slant that we had figured this out before we made the measurements. That might sound cocky to the non-scientist, but if you write a paper describing your discovery “path”, reviewers always seem to ask you to revise it. This work was also published in 2011.

Seth moved on from the Geophysical Lab to the University of Wyoming to continue working with Carlos. While there, he also branched out and began independent work with grad student Nathan Wolf. In the first of many experiments with laboratory mice, Seth and Nathan grew mice on a diet with varying amounts of fat (i.e. lipids). The protein the mice were fed originated from C3 plants, while the fats were corn oil, corn being a C4 plant. (See former blog posts on what these mean). Because the stable isotope signatures of compounds from these plants are very different, we could tell if the mice were using protein or fat to build muscle tissue.

This experiment was designed to answer an argument in the isotope community about the role of lipids in analyzing and interpreting the isotope patterns in whole tissues. Half of the stable isotope ecology community extracted and discarded the lipids in animal and diet tissues, finding them an unnecessary problem in interpreting the isotope data. Others, particularly people who studied animals that had fat heavy diets, knew that fats were important and needed to be part of the analyses. Our experiments confirmed that even in mice, the carbon atoms in dietary fat were re-used to produce mouse muscle.

Not only did the mouse use fats to make the nonessential amino acids in their tissues, but we also found strong evidence that some of that carbon from fat ended up in the essential amino acids as well. We concluded in this work that gut microbes produced valine and isoleucine, two of the amino acids made by microbes in the tilapia experiment. A second experiment with tilapia was conducted in 2012 to investigate hydrogen isotope patterns. When the results were completed, it was—once again—clear that essential amino acids coming from the rumps of microbes, more often than not, were supplementing animal diet.

Now at the University of New Mexico, Seth, colleague Tina Vesbach, and I submitted an NSF pre-proposal to continue the work. It was rejected as not making the mark of a detailed enough project. We completed another study with mice, and used that data for a second submission to NSF. The study was finally funded and is currently underway!

My fourth paper on this subject with those results that convinced NSF to fund our work was recently published in the Proceedings of the Royal Society B, a prestigious journal with a wide audience. The manuscript had been rejected, however, from PNAS, Science Advances, Functional Ecology, and ISME before we re-submitted it in December 2019 to the Royal Society journal. After three full rounds of review, it’s now out.

People are sometimes consumed with new diet crazes, like the current keto-diet fad. The keto-diet requires you to give up all carbs—no potatoes, no bread, and even no fruit! Certainly, no sugar—no cookies, soda or ice cream. Drastic changes like this to human diet must come with changes in the types of bacteria living in a person’s gut. Our isotope work is now linked to changes in the gut microbial community with changes in diet. In our work with mice, we found—once again—that valine and isoleucine were made by microbes 30-60% of the time. We also documented a shift in the type of microbe from Bacteroidetes to Firmicutes as dietary sugar increased. We don’t know yet exactly how this seemingly simple process happens or what those particular microbes are actually doing.

The bottom line is one that I believe will be increasingly important in using amino acid isotope patterns for tracing animal diets. I suspect that in the coming year more researchers will have a closer look at their data and realize that those microscopic beasts in animal guts are key to more than has been generally recognized.