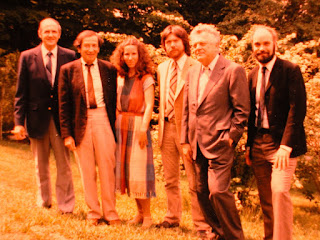 Stories about Tom are throughout my memoir because he had a way of contributing pithy advice whenever you or he thought you needed it. In summer of 1994, he attended the Organic Geochemistry Gordon Conference in New Hampshire, when he first noticed that he had a difficult time opening the screen door of his house on his way to the airport. That fall, his usually fastidious glassblowing was lopsided, even sloppy. In late September, he confided in me that he thought something serious was wrong. A few weeks later, he learned he had an aggressive form of brain cancer. He went through two surgeries in November and December. He trundled into the lab a few days that fall, with shaved patches on his scalp and bruises from numerous IV infusions. By February of 1995, he entered a skilled nursing facility in Chevy Chase, Maryland.
All of us from the lab visited every week, but it was clear he was declining fast. One Saturday, he told my husband Chris to move his “mass spectrometer” out to the patio—he meant his wheelchair. Tom had declared he was retiring at the end of June 1995. I had started planning his retirement festschrift to be held at a resort on the Potomac River in Northern Virginia. Colleagues from around the world were invited and coming. We held the event in May 1995, but Tom was unable to attend. It was his wish to continue even though he’d not be sitting in the front row napping frequently during the scientific talks. People who came from afar stopped by the nursing home and said goodbye. With colleague Dave Freeman, a chemistry professor from Univ. of Maryland, I assembled a booklet with reminiscences from many of his colleagues (see below).
Maxine Singer, President of the Carnegie at that time, wrote “His enthusiasm for science and sense of the Carnegie community have been evident in his frequent comments and questions about modern biology. His broad thinking extended to the constantly changing borders between biology and geology.” Colleague David Freeman noted about Tom, “He had big instruments, and worked with big ideas. He also had his own ideas. The scientific life for Tom is a complex of doors that open to ideas inside—any one of which might shift a perspective, reveal something new, or lead to a better question.”
Tom was variously described by his colleagues as “curmudgeon, impatient, cynical, distinguished, beloved, friend, generous, scientific marksman, pragmatic, enthusiastically contagious, loyal, respectful, supportive, fun, remarkably broad, analytically ingenious, pioneer, butterfly, leader, rigorous, gleeful, and kind”. As he aged, Tom was a magnet for postdocs who had a tough analytical problem. He enjoyed swiveling around on his desk chair, propping him feet up, and giving advice. He was known for folksy phrases:
“It’s more than tinkering. It’s what I call ‘having hands’.”
“We young people need to stick together.”
For lab equipment: “You have to show it who’s boss.”
And “If you don’t run the machines, they will run you.”
“Shoot first and ask questions later.”
“Pick five well chosen samples.”
Abelson and Hoering had an oft-challenging relationship. When they worked together as colleagues, Tom complained that Abelson could be sloppy and ask Tom to chase projects he wasn’t interested in. One year, Abelson asked Tom to take his place at a conference where Abelson was scheduled to speak, saying he was too busy to attend. Tom dutifully got on a plane, headed to California, and while giving the presentation, looked up and saw Abelson sitting in the audience! Every Friday, Tom’s phone would ring about 2 pm, and Tom would bark, “That will be Abelson!”


As editor of Science magazine, Phil called Tom for advice while writing his weekly editorial. In 1995, Abelson wrote this about Tom, “Soon after Hoering arrived at the Geophysical Laboratory, he and I collaborated in a number of experiments. In the course of these, while we were in daily interactions, I observed his superb qualities as a rigorous scientist. While he moved quickly and decisively, he was always cautious about random or systematic errors in his measurements. He was completely aware of the behavior and capabilities of his equipment and of possible isotope effects in procedures.”
at August 03, 2019