How to be a good postdoc 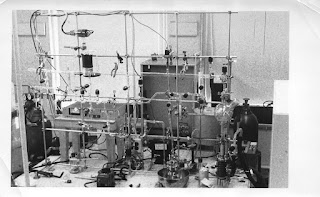 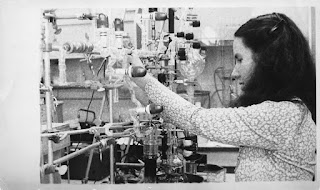 I arrived at the Geophysical Lab with small test tubes of carefully cultured microalgae from Van Baalen’s lab. Within a few weeks, I learned how to measure hydrogen isotopes in water, oils, and plants. I purchased supplies for growing algal cultures and obtained an old autoclave from our sister institution, the Department of Terrestrial Magnetism.  In my office, I set up an aquarium I’d purchased at a yard sale as a water bath, adding gas mixing lines and a temperature controller for growing pure, axenic cultures of microbes. The field of hydrogen isotopes in plants and algae was wide open at this point in time. After six months, I gave Tom Hoering a report of my work: investigating hydrogen isotope ratios in plants. A survey of δD values of various terrestrial plants, including lichens, liverworts, mosses, a fern, and angiosperm leaves, was attempted. Leaves on different branches of the same tree have basically the same isotope ratio although one leaf sample during the three-week period showed a considerable variation. Similar experiments with three species of mosses showed similar results, although one moss species was consistently different.
Today viewed from a 40-year perspective, these findings on isotopic variation in plants are both simplistic and profound because they highlight biological variations that capture the big trends. In fact, data like these are fundamental to understanding isotope biogeochemistry of hydrogen isotopes in plants. My report also included data on microalgal culture experiments and some phytoplankton samples collected in Chesapeake Bay. After reading my two-page report, I met with Tom who criticized my approach and told me “I wouldn’t have done things this way.” I answered that his opinion wasn’t my own, and I was proceeding just as I had planned. I am not entirely sure what he approach would have been, but given his strong talent in chemistry, I think he would have moved more quickly to studying plant lipids.
Biologists typically replicate their experiments. I needed to confirm that I wasn’t making “one off” measurements with just “5 well chosen” natural samples. Before proceeding further, I needed to know if different taxonomic groups fractionated hydrogen isotopes in the same way or in different ways. These fundamental questions obviously did not appeal to a geochemist, but they appealed to me and were important for me to follow my own ideas to completion.
In the 1970s, the method for measuring hydrogen isotopes in organic compounds was a three-step process requiring the exact procedure to be followed every time. Glass pumps filled with mercury and hot uranium metal could explode if you opened the wrong valve. The combination of 100 kg of mercury and hot uranium (750°C) made this a particularly dangerous analysis. Samples, after thorough grinding, were weighed into a ceramic combustion boat and inserted into a vacuum line where oxygen was introduced. The sample was then pushed into a 900°C furnace. A pump circulated the gases from combustion including carbon dioxide, water, and nitrogen. The water was frozen into a 6 mm Pyrex tube, which was sealed off with a torch. For every single measurement I made, the sample was analyzed about 5 to 6 times. The tubes with water samples were then attached to a vacuum line in which water was converted to hydrogen gas by reaction with hot uranium at 750°C. This vacuum line used a Toepler pump, a frightening, fragile glass contraption that cycled mercury up and down a glass column to move gases around. Hydrogen gas was collected in a sample bulb with a glass stopcock, which was then taken to a Nuclide 3” mass spectrometer especially designed for measuring the two isotopes of hydrogen: protium (1H) and deuterium (2H). The inlet systems of mass spectrometers in the 1960s and 1970s had mercury pistons to compress the gas samples to match the sample and standard pressures. Because I was on top of things and paid attention, I could analyze 10-12 individual aliquots in two days, which resulted in two publishable data points.
Other than the research Tom Hoering and I were carrying out at Carnegie during my postdoc, Sam Epstein and his students at Caltech were turning out the majority of work on organic hydrogen isotopes. Epstein’s work focused on measuring the isotopic composition of non-exchangeable hydrogen in cellulose purified from tree rings. He and his colleagues were using hydrogen isotope patterns in cellulose for studying paleoclimate in the Holocene (Epstein et al., 1977).  The basis of their work centered on the assumption that temperature affects the hydrogen isotopes of environmental water, and that the hydrogen in environmental water equilibrates with glucose monomers in cellulose during synthesis, often in a matter of hours. The premise of this work was based primarily on temperature-based isotope exchange of water with cellulose. My work showed that the hydrogen isotope patterns of plants were determined by biosynthetic reactions, not simple exchange. The experiments that I conducted with microalgae revealed that the water used in actively growing plant cells is not environmental water—there is a considerable lag phase between the time when water enters a cell and when it is used in biosynthetic reactions. Based on changing light conditions and using photosynthetic inhibitors, I learned that NADPH producing reactions in photosynthesis are key to providing most of the organic hydrogen in plant tissue (Estep and Hoering, 1980, 1981).

Reviews of my first manuscript, submitted in 1979, on hydrogen isotope fractionation by microalgae were harsh. One reviewer remarked with sharpness: “This paper suffers from a fundamental flaw in experimental design.” The review primarily criticized the measurements on the bulk or total hydrogen in the algal cultures or plant leaves. The reviewer assumed that in living organisms C-bound hydrogen was not exchangeable with water, but hydrogen bonded to nitrogen, oxygen or sulfur, readily exchanged with any contact with water. The exchangeability “controversy” persisted for over 20 years, until finally a number of researchers repeatedly showed that only about 10-15% of hydrogen in molecules like keratin (e.g. feathers) is exchangeable, whereas the remainder of the organic H, if bonded by covalent or ionic bonds does not (e.g. DeBond et al., 2013).
at August 03, 2019