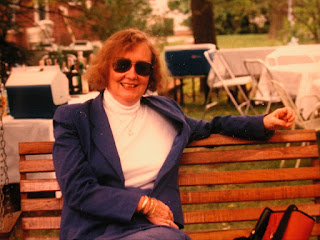 Margie Imlay: Secretary and Assistant to the Director 1955-2008

If you are lucky enough, you will have had a friend like Marjorie Imlay some time in your life--a friend who was there to listen, to offer some advice, but also one who was willing to leave you alone when you needed it. A friend, who always had a funny phrase or joke to pick you up when you needed it most.  For me, working at the Geophysical Lab, I relied on going to her office, often as not, to speak to Marge as a voice of reality and common sense. As a young woman, Margie was a curly headed blonde with the sparkling blue eyes, a big bust, and the flashy jewelry. She regaled me with stories of pouring vodka tonics, flirting with the Geophysical Laboratory scientists, and joking with the women.
Margie had a wonderful life. She did pretty much what she wanted. Margie enrolled in secretarial school and worked in various government and business offices in the DC area just after graduating from Roosevelt high school in Washington, DC. She started work at the Lab when she was in her early twenties. Phil Abelson hired her in 1955 for the princely sum of $3,200 per year. As breadwinner for her family after her father’s sudden early death, she sometimes worked three jobs at once to pay the bills.
In the early 1960s, she scraped up enough money to buy an old MG convertible, with holes in the roof that served as her early “wheels”. Imagine the young blonde zipping around DC, for sure a heartthrob to many a young lab postdoc during that time. She was very popular, but never married, and dated some very interesting men, even some GL people that she kept a careful secret!  Margie claimed, when pressed, that everyone she dated seriously proposed marriage, but she never accepted that we know of!
When I met Margie in 1977, she served as the head secretary for the Lab and was the most skilled typist and stenographer. She worked in the back office surrounded by knickknacks on her desk that were mementos of her family: her sister, her mother, and her aunt. Margie was imperious to me in those early days: she spoke with authority, always carried a large purse bulging with important papers, and a wallet stuffed with cash. Margie typed my first GL manuscript and let me know in no uncertain terms that I was to make sure my tables were in final format before she spent the time typing them! When I was offered a staff position at the Lab, Margie quickly became my ally, letting me in on things that I needed to know to get by in an all male world.
As an escape from her family’s health issues, Margie worked at the Lab: she progressed from secretary to head secretary to assistant to the Director after the death of Dave Singer in 1986. Margie’s stock in the Geophysical Lab rose substantially during this time, and she not only did the bidding of the director, but also held together the postdocs, students, and other young people as they came through. Margie’s office served as a place where you could let the Director know informally “through the back door” how things were going, if you had any problems, or if you had great successes. There were weeks that I avoided going over to see her, because I knew it would be hours before we would be finished with all the things that needed to be said.
As Assistant to the Director, Margie held responsibility for appointment letters, keeping records on scientists, arranging for hiring and performance reviews, and organizing social functions. For over twenty years, she took on the role as Unofficial Photographer. For Directors Hat Yoder, Charlie Prewitt, and Wes Huntress she served as their Eye and Ear on the day-to-day workings of the Lab. These men trusted her judgment and wisdom, often asking her personal opinion on issues they struggled with. She had so many stories about people at the Lab - some very funny and some tragic.
At the age of 75, Margie retired. Her blonde hair was thinner, her bust even larger, and she still wore great costume jewelry, but she looked tired. She had spent 5 months working with her new boss, Rus Hemley, and had started to train her replacement. With typical Margie stealth, she avoided a big retirement party, preferring to avoid the spotlight. Avoiding the spotlight was one of Margie’s hallmarks. A woman who served to support people, who provided a major source of advice and support for my career and family life, she was a woman who preferred to help others rather than to help herself. Margie died suddenly in 2008 with complications from a blood clot and the Laboratory lost one of its most colorful characters.