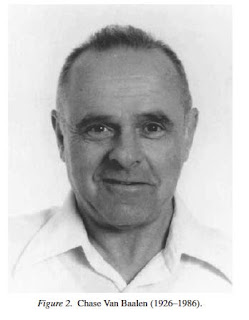 In early January 1974, I flew down to Texas from my family home in New Jersey. My one suitcase was filled with woolen winter clothes, leather boots, and only a few summer things. I brought my pillow and a typewriter.  Parker picked me up at the airport in his old VW bug, rusted out on the sides. He was a modest looking man with a small mustache, a bit of a limp, and shaggy brown hair. Even as the Director of the Institute, he wore old khakis and an un-ironed short sleeve shirt with no tie. I had formed a different picture of how he looked based on his Science papers. We drove to Mustang Island, where the Marine Science Institute was located, with the final portion of the journey via ferry. Coming from urbanized Southern New Jersey, Port Aransas seemed like a town literally at the end of the earth for me. The next day I met Professor Chase Van Baalen. Chase was often mistaken for one of the maintenance staff. A short fellow with a crew cut, Van Baalen smoked a pipe, and was known for shoving his lit pipe deep into the pockets of his jeans. His right hand lab assistant, Rita O’Donnell, took care of the lab glassware and culturing facility for Chase. She was a crusty, Port Aransan, who also owned and managed a popular motel with her husband. Parker’s lab manager, Ken Winters, was a former Ph.D. student of Pat’s. A real Texan, Ken was polite and funny and fortunately for me, very organized.
I settled in quickly, meeting and getting to know other graduate students and postdocs. My first mini-project was to assay naturally occurring iron binding compounds made by microorganisms. Iron is a limiting nutrient for almost all organisms from microbes to humans. We were searching for new compounds that assisted bacteria and algae to easily take up iron without being limited. Others had found these molecules in cultures, but no one had looked for them in nature.  I gathered algal mats from nearby lagoons and shallow marine sediments, extracted them, and then placed the extracts on a lawn of bacteria that required an iron-binding compound to grow. We discovered that organic, iron-binding compounds were widespread in the natural environment, not just secretions from laboratory microbes. It was a winning small project, and the subsequent publication, standing the test of time, is still relevant (Estep et al., 1975).
After the study on iron binding compounds, I started my Ph.D. project with funding from a NASA Exobiology grant working with Parker, Van Baalen, and microbiologist/enzymologist F. Robert Tabita. My Ph.D. research was to purify the enzyme key in fixing carbon dioxide in photosynthesis—Rubisco--from various organisms, then carry out a series of complicated experiments to measure how carbon isotope patterns were modified by Rubisco.
Harmon Craig wrote the first blockbuster paper on “carbon isotopes in everything” from diamonds to an unwitting discovery of a C4 grass (Craig, 1953). His later work tracked major carbon isotope systematics in the world’s oceans. At the same time, Melvin Calvin and A. A. Benson were using radiocarbon to track the pathways of carbon fixation (Calvin and Benson, 1948). A paper by Park and Epstein (1960) linked the two types of studies and measured, for the first time, the carbon isotope fractionation by the CO2 fixing enzyme Rubisco. Using a purified enzyme, bicarbonate, and ribulose 1,5-bisphosphate (RuBP), they calculated an isotope fractionation indicating the lighter isotope of carbon was favored over the heavier one during the reaction. Not much was known about the structure and function of Rubisco at this time.
Work in the late 1960s and early 1970s on the structure and function of Rubisco brought new interest to the carbon isotope fractionation studies in plants. Bob Tabita, then a recent Ph.D. and postdoc, brought his skills in purifying Rubisco as an Assistant Professor at the University of Texas. His work centered on isolating and describing the different forms of bacterial Rubisco enzymes—their structures, kinetics, and activations. Rubisco from higher plants has a molecular weight of 550,000 and is composed of 8 large subunits and 8 small subunits. Park and Epstein’s experiments with Rubisco carbon isotope fractionation used enzyme from the tomato plant.
My Ph.D. research started with purified spinach Rubisco followed by isolating and purifying this enzyme from various microorganisms. The idea behind this work was to figure out why carbon isotope measurements of modern and ancient sediments and rocks were so different from one another. Precambrian stromatolites were thought to be microbially produced structures formed primarily by cyanobacterial primary producers. One question that persisted was whether or not the Rubisco from cyanobacteria produced the same degree of carbon isotope fractionation as the enzyme from higher plants. At the time, Tabita and others thought that the cyanobacterial enzyme had a different structural form from the higher plant Rubsico, although subsequently this was shown not to be the case. The photosynthetic bacteria, Rhodospirillum rubrum, produced two different forms of the enzyme: form I, the high molecular weight form, and form II, a Rubisco with a smaller molecular weight. We wondered whether the different forms might be associated with different enzymatic mechanisms and consequently different isotope fractionations.
At the time Rubisco isotope research was a very hot field. A group from New Zealand published experiments using soybean enzyme (Christeller et al., 1976), which showed little effect of bicarbonate concentrations or temperature on fractionation. A team led by Bill Sackett at Texas A&M published work using sorghum Rubisco and measured extremely variable carbon isotope fractionations We did not find this work compelling given the large differences between the two temperature treatments. Further, Sackett’s group used a cell-free extract, but not purified protein. Deleens et al. (1974) experiments gave carbon isotope fractionation with a range that was completely beyond that known measurements in natural samples. Neither of these groups used Rubisco from taxonomic groups other than higher plants.

My challenge was to grow microorganisms in large quantities from liters of pure cultures and to purify the Rubisco to homogeneity, i.e., isolating it from all other proteins. The work required that I learn sterile technique and microbial culturing. Once the organisms had been harvested, enzyme purification required column chromatography using size exclusion principles. The location of Rubisco separated by chromatography was assayed by radioactive bicarbonate (14C) uptake measurements. Once the Rubisco was identified, I purified large amounts, milligrams of pure protein, for the isotope experiments. Rubisco was incubated with milligram quantities of the substrate RuBP with an excess of bicarbonate in a buffered solution. When all of the RuBP was used up, each of the 40 experiments was terminated and the product, phosphoglyceric acid (PGA) was purified by crystallization.
Once the PGA was purified, I proceeded to Pat Parker’s aging “Craig line”—a variation of hand-blown glass tubing modified from Harmon Craig’s original vacuum system. My sample was then pushed into a furnace in which oxygen was added, the PGA was combusted, and CO2 was produced.  The carbon isotope combustion of carbon dioxide was analyzed on a 1960s version Nuclide 6” isotope ratio mass spectrometer (IRMS) complete with now archaic electronic devices and strip chart recorders for recording the isotope compositions. In those days, measurements were completed by hand using rulers and slide rules to calculate the isotope values. Our work showed that different enzyme forms and different metal cofactors resulted in variations in isotope patterns.  We also showed that the enzymatic isotope change between the first product of photosynthesis and carbon dioxide was greater than that measured in vivo with whole plants and cells. This finding led to further studies by Graham Farquhar, Joe Berry and Marion O’Leary (1981), who developed mathematical equations for carbon isotope fractionation by C3 and C4 plants.  My research still provides the foundations of understanding the evolution of photosynthesis on earth, how climate cycles have changed over time, and how plants manage their water budgets.
at August 03, 2019