The school year before we separated into Cool Kids and Those Who Are Not was 6th grade, when we were all 12 years old. In Moorestown New Jersey our small town was growing rapidly with elementary schools filling up and overflowing. To solve the problem temporarily, we 6th graders attended a school composed almost entirely of 6th grade kids. It was my favorite school year. I had a ball and learned about people, myself, and the world.

The school chosen to hold us pre-teens had the name Number 7 School. Constructed well before World War II in the early 1900s, the school was built to educate the Black students who lived in a segregated region of majority White Moorestown. Literally, there was a railroad line that separated the Black community from the white. Moorestown Public Schools, though, started bussing a few students in 1959, when I was in 2nd grade. Number 7 school was finally repurposed and sat relatively quiet for a few years before overflow 6th grade classes were taught there. 5th grade was ultimately disappointing for me, so I was hoping for a good year in 6th.

My family lived on Greenvale Road, a post WWII subdivision of about two dozen “ranch” style houses with sandstone fronts, nice sized yards, and uniform floor plans. We were located between two school districts—Roberts School, a brand new single story elementary school adjacent to Memorial Field where local football games were held, and Lenola School, another early 1900s, two-story, old brick building in the mostly blue-collar Moorestown community of Lenola. I spent my first three years (K-2) at Roberts School getting a ride to school with a group of car pool mothers in the morning, then walking home with the Greenvale Raiders, our gang of kids, in the afternoon.  Starting in my 3rd grade year, the kids from Greenvale Road were sent to Lenola School with some amount of grumbling by our parents, angered we’d be attending a much older, and less prestigious, school.

In general, shifting schools at this age can be difficult no matter the reason for the change. Rapidly, however, we adjusted and learned a new routine and made new friends. By 5th grade, we were all a pretty proud group of kids with our own cheerleading squad and football team.


But, in 5th grade we suffered what many kids do in neighborhoods that aren’t heavily supported by wealthy, powerful parents. I started 5th grade with Mrs. Broadwick, a phenomenal teacher who commanded her classroom with grace and fairness. She was a large-boned young woman, bookish with glasses, and longish skirts. I learned about science in her classroom and enjoyed arithmetic. She encouraged all of us to read, sing, and love school.  By mid-year, Mrs. Broadwick revealed she was pregnant (and showing!). Owing to now outdated policies about pregnancy, she was made to quit teaching around her 5th month leaving us with a long-term substitute teacher.

Mrs. Zastavony, who I thought resembled a woman with a pointed hat, a long black dress, and a broom, replaced the angelic Mrs. Broadwick. She was a terrible educator and unfamiliar with the curriculum and 5th grade students. Across the hall was a disaster of an even higher order. Mr. Mayosky, a veteran at the rank of chief petty officer in the US Navy, abused his students—even going so far as beating up slightly mischievous boys. I could hear him shouting at his students from across the hallway. After several egregious incidents, he was fired. We 5th graders were a pummeled group that year. I learned very little the last 3-4 months of 5th grade.

Fortunately, we found a better school and better teachers at Number 7 School, an archaic 2-story school with a basement housing a belching boiler that often went on the frizz, a library stuffed into a small office, a small playground with no frills, and an All Purpose Room where we ate, held assemblies, band practice and gym classes. There, I learned it wasn’t the physical nature of school that made it great—it was the atmosphere, its people, and the “climate”.

Riding my bicycle to Number 7 School each day, I crossed the railroad tracks into a different community where all of Moorestown’s Black citizens lived. Parents of white kids were concerned—and let school board members know this. Some parents chose to drop off and pick up their kids every day rather than have them come and go on their own. It was a good lesson for me about inherent racism.


Today, racism has reared its head again with the murder of Black citizens for passing counterfeit bills, jaywalking, or being in the wrong place at the wrong time. Society in the United States is white oriented, and even those of us who consider ourselves not racists, the definition of what racism is has changed. Riding my bike through that community as a 12-year old kid made me look at how our little town handled those who were different. I hadn’t had to consider my whiteness previously, but I did then. In 1964 the Civil Rights Act was made into law. Moorestown, fortunately for all of us 6th graders, had already realized “separate but equal” should not apply to education. It was some time later that Black families moved into and integrated Moorestown.

My 6th grade teacher was Miss Jane Molthop, a single gal who had recently graduated from Glassboro State Teachers College. Miss Molthop had shoulder length light brown hair that she wore in a fashionable “flip” either with ends curled up or under. She wore stylish clothes—sweater sets, plaid skirts, nice shoes and had flashing blue eyes. When we had gym class, she put on a pair of sneakers and joined us, throwing baseballs, running, and doing calisthenics. Best of all, she bought a brand new Ford Mustang in 1964, the first year those muscle cars were built. How cool is that? Not only did she purchase a Mustang, but it was a convertible to boot.

My class included a mixture of kids from all three of Moorestown’s elementary schools. I met Jean Berry, Curt Preston, Robert Brownell, David Fenwick and others in Miss Molthop’s class. Jean and I formed an immediate friendship with our love of history, reading, and geography. I had a crush on Curt Preston—that 6th grade sort of crush in which you expressed your feelings by chasing each other on the playground at lunchtime. [He wasn’t interested.] We girls were required to wear skirts or dresses in those days. Often we wore shorts under our skirts so we didn’t show our underwear and could still roughhouse with the boys.

I recall that Miss Molthop organized our class by having students of similar learning styles sit near one another. I was clueless then about why I was assigned to the desk in the far right back of the class. I am not sure if this was the correct way to organize a classroom, but it worked for me. We wrote original stories, made mailboxes for holding valentines, and read our work out in class. I remember thinking that learning was fun—not boring or simply memorizing facts.

It was the first year I recall learning about other cultures—the Roman Empire, Genghis Kahn, the Persian Empire, China, and Africa.  And it was November 1963, that we all learned President John Kennedy had been assassinated. We followed this devastating news by a unit on Presidents, Kings, Queens, and Prime Ministers from all of the world’s nations. African nations were ending colonialism after WWII—we followed their freedom when it was granted looking at the old-fashioned political map posted in the front of the classroom watching the pink British colonies turn to different colors. 6th grade started my life-long love of politics, geography, and travel.

As 6th graders we were required to write with a real ink pen, not a ballpoint pen. Imagine a class full of 12 year olds trying to use ink pens! I bought a jazzy green cartridge pen—a pen that attached to a sealed ink cartridge so it worked seamlessly. I also had an old ink pen that had belonged to my grandmother which used ink from a bottle that eventually spilled or leaked.


It was also the year us girls were pulled out of the classroom and taken into another room and shown a film on menstruation. I think teachers hoped our mothers had prepared us for the shocking revelation. Mine hadn’t, so the news of what would happen to me came completely out of left field. I think the boys had their own meeting, but I didn’t exchange information with any boy I knew. [In 7th grade we were taught “where babies came from.”]

At the end of the school year, Miss Molthop invited our whole class to an afternoon picnic in her parents’ backyard that was right next to a small forest with a little creek. That hot June day was, without question, a highlight of my young life, and looking back on it decades later it makes sense as to why. We wolfed down potato salad, deviled eggs, chips, ice cream, hamburgers and hot dogs. Sodas were plentiful. And we girls chased the boys, and they chased us! It marked the end of my innocent childhood.

My young eyes had been opened to new people, new ideas, new cultures, a new body, and a glimmer of potential that someday I might be the cool teacher with the convertible Mustang, a mother, and the member of an international community. 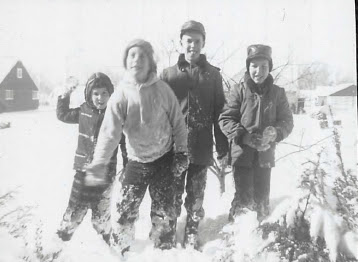