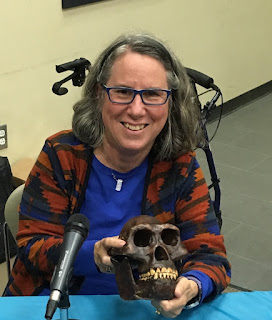 “It is my opinion that for a laboratory as small as ours, the main thing in choosing a new staff member is to find a man with a set of good ideas, the ability to carry them out and the personal drive to work alone. I would consider then the nature of the work he wished to do. The laboratory is too small to do everything, and is even too small to do everything that is significant in the earth sciences. It then seems to me that the type of man that is available is of prime importance… It would be well to have someone who has had some training along biological lines.”

Looking in the rearview mirror at the 50 years of my journey in science, I see a life rich in scientific discovery as well as scientific colleagues, who have without a doubt enriched my life. No one can predict what path their career will follow. Mine began in 1970 at Penn State University as a biology major, where I became intrigued by recent findings of ancient life on Earth. The Viking space probes had landed on Mars, and impacted my curiosity about life on other planets, a theme that remained dormant for many years. I knew at an early age (19 years old) that I wanted to use my interest in chemistry to investigate biological phenomena that happened during the span of Earth’s history. My career has encompassed three different fields: Biogeochemistry of modern environments and ecosystems; Paleo-biogeochemistry of fossil and historic ecosystems; and Astrobiology. What I’ve learned about how organisms interact with their environment, essentially the study of ecology, and what stable isotope patterns might be associated with those relationships has been critical for interpreting ancient rocks and fossils, as well as signatures of potential life from outer space.
My Ph.D. work in 1974 was funded by a NASA Exobiology grant. Later in my career, it came as no surprise that I would be fascinated by the search for life in the universe. My work came full circle 30 years later with the study of astrobiology in the Arctic, India, and other extreme environments.
The majority of my professional career took place at the Carnegie Institution of Washington’s Geophysical Laboratory. I was fortunate to land there at a time when biogeochemistry was in its infancy. Without fully being aware of where I was headed, I jumped with both feet into multi-disciplinary work, not being afraid to collaborate with smart people in many different fields along the way. Carnegie encouraged its staff scientists to think broadly, try new things, and be creative. In the early days from Carnegie Institution’s inception until about 1980, we did our research without significant government funding. My early work was supported in part by grants from private foundations, money that I may have never seen explicitly, but nonetheless provided support for my postdocs, lab supplies, fieldwork, and an occasional conference.
As I grew more experienced, I transformed from a shy, quiet, perpetually youthful looking woman into a more outgoing leader. Always serious, it took awhile for me to realize that being quiet did not help my career. I attribute the transformation to a supportive husband, motherhood, and great colleagues. My husband, Christopher Swarth, forced me, pleasantly, to stand up for myself and speak out when I had an opinion. As a mother of two young children, I learned more about how to work effectively as a scientist, while taking care of others. Eventually, I developed personal relationships with Geophysical Laboratory scientists, Tom Hoering and Doug Rumble, as well as others who supported my ideas and recognized the value of my hard work.
Mentoring young scientists along the way became one of the most rewarding aspects of my career. Carnegie supported a vigorous postdoctoral program, and typically I worked with one to three postdocs at any one time. Although the Carnegie Institution did not grant academic degrees, I served on the committees of many graduate students and was an active participant in their research. Bright undergrads and high school students somehow magically appeared each summer and enriched my career with their innate fascination for science. I learned much from these folks.
Below is the story of my career thus far (1970 to 2019).  Its path has influenced many of my direct associates as well as those related to them. My academic family tree, thanks to a lifetime of mentorship from people who cared and were smart, is healthy, active, and strong. These relationships buoy me daily, especially as I transition to the next phase of my career. In 2016, I was diagnosed with amyotrophic lateral sclerosis (ALS; Motor Neuron Disease in Europe), which abruptly changed the way that I had planned to end my career. No longer able to travel at the drop of a hat to far-flung field areas; no longer able to wield the wrenches in the lab; and finding it difficult to travel to conferences, I have had to consider what is most important in this phase of my life and why it might be so. Accordingly, it was finally the right time to write a memoir of the experiences I’ve had as a scientist that I hope will serve as inspiration for young and old readers alike on the joys and challenges of a full, intellectual and personal life.
Science today is as important for advancing civilization as it was 50 years ago, but how it’s carried out and by whom is shifting. China has surpassed Japan as the Asian science powerhouse. The European Union is investing large sums of its resources into bigger projects that the United States is not competing with. Consequently, how science is done in America and whether or not as a country we will be able to maintain a healthy scientific agenda remains, in my opinion, to be seen. How are young people being introduced to a scientific career? Will they have the freedom that I enjoyed to pursue the science I felt was important? Students that I talk to at the University of California are curious about how a career gets started and how it evolves. In particular, early career women want to know how they should have the right amount of competitive spirit versus being considered bitchy and nagging. I hope that the stories of what I journeyed through as a scientist, person, wife, and mother are helpful for early career scientists figuring out how to navigate their lives.
at August 03, 2019

Email ThisBlogThis!Share to TwitterShare to FacebookShare to Pinterest
Labels: Introduction and Beginnings