Is “Science” neutral and objective? —A woman’s perspective

I’m teaching a 2-credit class on “Diversity, Equity, Inclusion, and Justice in the Geosciences” this spring quarter. Twenty-two graduates students are enrolled in the course. This week we discussed several introductory topics including a statement from a paper entitled Examining intersectionality and inclusivity in geosciences education research: A synthesis of the literature 2008–2018 by Allison Mattheis, Megan Murphy, & Erika Marin-Spiotta

[https://doi.org/10.1080/10899995.2019.1656522]. I’ve posted an earlier blog on DEI issues as well as my diversity statement (My diversity statement). Someone commented that Science wasn’t influenced by diversity. Science is based on data and truths—doesn’t matter who carried it out.

Don’t we all know that? Of course we do, but do we believe it? And does our experience tell us otherwise?

In the United States, Science taught in elementary school teaches youngsters that the Scientific Method is how all scientists do their research. You develop a hypothesis, design experiments to test the hypothesis, carry out the experiment, and then analyze the data. The hypothesis is either proved or disproved. Not until I had my first undergraduate research experience at Penn State did I really have an opportunity to try something slightly different.

I was tasked with studying the fatty acid composition of mangrove plant samples. [Mangroves are salt-loving trees living in coastal zones in the tropics (Link).] There was no hypothesis; at the time, we just didn’t know what fat compounds these plants synthesized. We wanted to know if they made any unusual compounds (i.e., biomarkers) that could be used to trace their presence in ancient sediments. I began by using strong organic solvents to extract the lipids (fats) using a type of distillation that uses heat to bring out the compounds from the plant into solution in the solvent.

One of the steps in the process included purifying oxygen gas by bubbling it through concentrated sulfuric acid. I was shown a glass setup with 200 milliliters of strong acid, a tank of gas, and a water bath. I had on safety glasses—but no lab coat, no gloves, no face shield. Things worked as they should have at first, but when I turned off the gas, a drop of water was sucked backwards into the acid. The whole thing exploded!

Fortunately, I was wearing a thick, velour sweatshirt and jeans. Lab mates rushed over and doused me with water. I was in shock. My sweatshirt was pulled off—and a lab coat went on as I was whisked to the campus medical center. First aid saved me—and nothing happened to my face. I learned a lesson. Acid goes into water—never the other way around.

Not only did I have this awful experience, but also my mangrove lipid samples showed contamination. My grade: C- sloppy. Fortunately for me, the lab’s PI Professor Peter Given recognized my potential and helped me land a graduate student position at the Marine Science Institute at the University of Texas.

Looking back on this, his help wasn’t necessarily objective, but I took advantage of it. I can’t say that I’ve used the Scientific Method really during my 50 years in Science. Earth Scientists more often follow discovery-based methods. I prefer that approach along with multiple working hypotheses, which I find more practical.

In graduate school, I was one of very few women, finished up in three years, and went on to a postdoc. I did not recognize then that it was unusual to finish a PhD in three years. No one mentioned that I’d done a good job. As a postdoc, I worked alone at the Geophysical Laboratory, following my “nose” for Science as soon as I arrived until departing 35 and a half years later. Along the way, I experienced what many women and people of color experience.

I was often ignored during the very early years. International visitors would come to the Geophysical Laboratory, and I’d not be introduced to them. 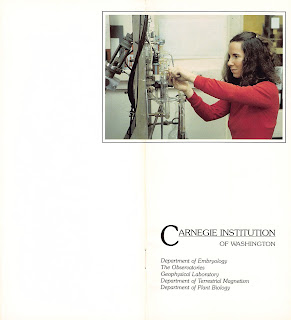 I was overlooked and not asked to apply for an open position as Staff Member in Biogeochemistry that I ultimately was awarded.

Years later, reviewers (Link to mansplaining story) thought I was “following” my older colleagues, although I’d established a grant and publication record without their help or participation.

On the national and international scene, it took decades to be an invited speaker at conferences. I was rarely asked to review manuscripts.

Some of my most innovative work received scant recognition. For example, I published the first paper on tracing animal diets using hydrogen isotopes. Hundreds (if not thousands) of papers have appeared since, yet my original work has been cited only 142 times since it was published in 1980.

In 1997, I was (somehow) appointed to the National Research Council’s Space Studies Board. It was my first time to join a distinguished group of scientists weighing in on policies for NASA. I was chosen because of my interests in Astrobiology. After learning how this Board worked, I began to raise my hand more often and speak up.

At first, I was ignored. Women and people of color will recognize how they can introduce a new idea, only to have the very same idea brought up five minutes later by a man.

I persisted. Eventually, people began to listen when I spoke and started to attribute my ideas to me. I gained confidence. It took a lot of work to blast through subjective, biased Science.

In 2016, with the advent of ALS, I entered the realm of the disabled, which intersected with being a woman. I was turned down for a promotion that year. Was this related to the disability? It could never be proven.

Back to the original premise. Is Science neutral and objective? Students in my class felt it was not—almost unanimously.

Young people starting out in earth and environmental sciences are keenly aware that something needs to change. How we determine who gets funded, who is hired, who gets into grad school, what gets published, and who is promoted is currently being discussed in academic departments around the world.

Science, anyway you think about it, is done by people and as I know, people are rarely neutral in their opinions, and not always objective. It’s time to move forward and recognize individuals, in particular those from under-represented groups.