Mangroves, Muck, and Corals in Belize 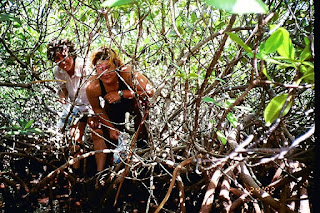 If you’ve ever spent time in southern Florida out in the Everglades, it’s likely you’ve seen mangrove trees---trees that are at home with their “feet” in seawater. Often characterized by aerial roots that form impenetrable thickets, the red mangrove (Rhizophora mangle) is the iconic species occurring from Florida all the way south to Panama. Mangroves, in general, encompass a wide variety of tree species, all of which are salt tolerant and grow in coastal zones in the tropics and sub-tropics worldwide. The mangrove ecosystem hosts a diverse community of organisms in the trees’ canopies, underlying soils, and adjacent waters. They are some of the most productive ecosystems on the planet fixing carbon at fairly high rates and providing fuel for important fisheries. Because they grow at the land-water interface, mangrove ecosystems protect inland communities from flooding, hurricanes, tsunamis, and sea level rise. Unfortunately, because they are on coasts, these forests are often targeted for destruction to make way for development. Understanding how they function in their natural state, and in proximity to humans, is key to learning how they tolerate and adapt to changing global conditions.
By far some of the most engaging research in my career started in the late 1990s when I joined an interdisciplinary group of ecologists led by Candy Feller, Smithsonian Environmental Research Center (SERC). Feller is a plant and insect ecologist, who teamed up with Myrna Jacobson, a geochemist, then at Georgia Tech. Candy and Myrna attended a workshop where the concept of studying ecosystems using biocomplexity theory was introduced. Biocomplexity is defined as “properties emerging from the interplay of behavioral, biological, chemical, physical, and social interactions that affect, sustain, or are modified by living organism, including humans.” (Michener et al., 2001). Feller and Jacobson swapped research interests and a collaboration was born. Candy Feller along with Catherine Lovelock, plant physiologist, and Karen McKee, USGS ecologist, were already studying the effects of nutrient pollution on the growth and health of mangroves. Our research team included scientists from six institutions and was, at that time (1999) one of the larger projects I had ever worked on. 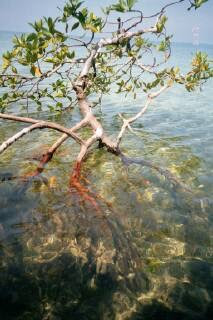 I started this research with a lot of excitement and enthusiasm. Joining a new collaborative research study with biocomplexity as the central theme was a challenge for me. Over the next 12 years, I learned a lot about mangrove ecosystems and interdisciplinary collaborations. Along the way, I mentored several bright postdocs and students--Matthew Wooller, Barbara (Babs) Smallwood, Quinn Roberts, Isabel Romero, David Baker, and Derek Smith--providing them with awesome scientific experiences that they will remember for a lifetime. What began as a straightforward study morphed quickly into a project that demanded creative thinking to figure out how the mangrove trees we were studying managed to survive, and thrive, in nutrient-poor conditions. We discovered that the mangroves depended on the interaction of microorganisms living in surrounding sediments for their growth and success. How we came to this discovery called on innovative sampling in the field, new techniques in the laboratory, and the development of theoretical ecological models.
at August 06, 2019