Isotope measurements in nanograms of "stuff" 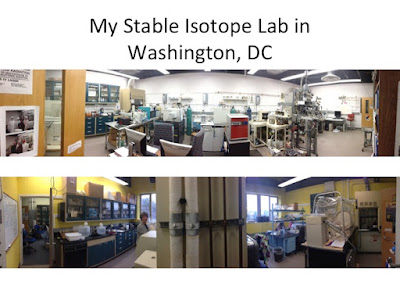 While our group at the Geophysical Laboratory forged ahead with measuring the isotope compositions of individual compounds using liquid chromatography methods, these were tedious, time-consuming techniques, and really forced us to measure what Tom Hoering termed “five well-chosen samples.” John Hayes and his students were pioneering continuous flow methods that worked directly with gas chromatography-IRMS (Matthews and Hayes, 1978). At the same time, both of the major IRMS companies, Finnigan MAT and VG Instruments, were perfecting versions of an interface that allowed compounds in a stream of He to enter the IRMS source at pressures that could be handled by the source turbo pump. Computer software was also being drafted to handle ion counts from distinct peaks rather than static measurements from dual inlet systems. Finnigan’s team included John Hayes (Indiana University), Martin Schoell (Chevron), Kate Freeman (Indiana University graduate student), Willi Brand (Finnigan), and Bob Dias (Chevron). They worked with software engineer Margaret Ricci (Penn State) to produce Finnigan’s first commercial model of the gas chromatograph-combustion system (GC-C-IRMS). At VG, Jeanette Jumeau, Steve Macko (University of Virginia), and Michael Engel (University of Oklahoma) developed a parallel instrument. Competition for customers was fierce!
I received NSF funding for one of these instruments in 1990, and Tom Hoering and I traveled to see both companies’ products. In the VG factory in Manchester, England, the PRISM IRMS system in their demo lab was not operational. We spent two days looking at the GC-C set up, but were unable to determine how it worked. We took a second trip to John Hayes’ lab where the Finnigan instrument was demonstrated by Kate Freeman, who has now been elected to the National Academy of Science. Kate started her earth science career as an undergraduate intern at the Geophysical Laboratory, washing glassware for me and working on some organic extractions for Tom, so we knew her well. The 252 IRMS was a real winner, and the backing of people that we knew well, Freeman and Hayes, sealed the deal for us. Kate recalls, “I remember showing the instrument to Tom. It was an exciting moment for me (and a bit terrifying). Tom walked into the room and immediately disappeared.  We were startled but quickly found him crouching behind the instrument to see the pumps and guts of the thing. “
The first system I received was relatively primitive compared to the GC- Isolink systems used today. There were four needle valves for controlling GC flow that needed to be fiddled with daily, if not before every sample. Combustion reactors were expensive, $1000 in 1992, and broke easily when they were installed. Jeff Silfer (Michael Engel’s Ph.D. student) joined the Geophysical Laboratory for a short time as a postdoc and helped get our system running. It worked slightly better than the old liquid chromatography methods, and we could measure hydrocarbons, fatty acids, and other molecules that liquid chromatography could not easily separate. Much of our work at that time was discovery-based and unpublished. Our questions were very simple: what is the variation in the carbon isotope of certain compounds in a plant? How do the carbon isotope values compare between species? Silfer brought his amino acid methods (Silfer et al., 1991) to the Geophysical Laboratory and we were soon off and running on CSIA of amino acids, methods I still use today. Upwards of 40% of presentations at the 2018 Isotop Ecology (IsoEcol) meeting included amino acid isotope measurements. 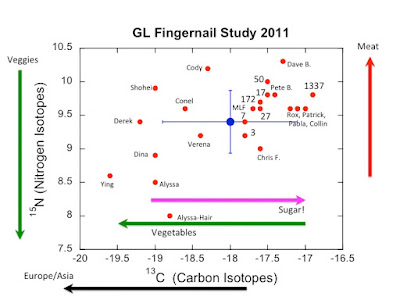 The impact and promise of CSIA in amino acids has been fully realized in marine science and animal ecology. A collaboration with colleagues at University of Delaware on the growth of commercially important and tasty blue crabs (Callinectes sapidus) resulted in one of the first studies on CSIA-AA that tested different diet sources for early growth stages in a lab setting (Fantle et al., 1999). Our work using both bulk tissue and amino acid carbon isotope data showed that diet quality was important for determining the isotope fractionation between diet and animal tissue, not simply the diet quantity or source. Using nitrogen as an additional tracer, it became clear that juvenile blue crabs not only lived in and depended on Spartina marshes as a sanctuary while young, they also depended on marsh carbon and nitrogen for survival. CSIA-AA showed that detrital material is isotopically heterogeneous, cautioning those using bulk tissue isotope values for diet sourcing to think about diet quality. 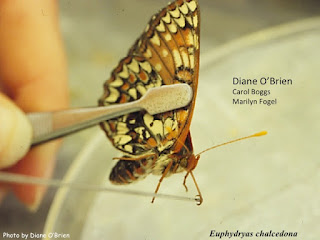 Email ThisBlogThis!Share to TwitterShare to FacebookShare to Pinterest
Labels: The Isotope Laboratory