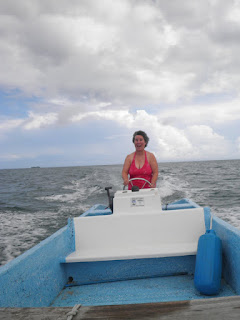 In 2009, after accepting a position at the National Science Foundation, I wrangled a postdoctoral fellowship for David Baker. Baker, a grad student from Cornell University, visited the Geophysical Lab a couple of times asking for a postdoc so he could continue his work on isotopes in corals. Finally, I recognized that here was a determined, smart young man who had a vision of how he wanted his career to unfold. He managed to get a matching fellowship at the Smithsonian, which opened up the possibility of going to Twin and Carrie Bow Cayes again. At the same time, Derek Smith, a former student from James Scott’s lab at Dartmouth was working on his Ph.D. on purple sulfur bacteria. We developed close ties with each other, including afternoon trips to the Lab’s attic where a small gym allowed us to benchpress weights and have some laughs.
In 2011, we planned our trip to Carrie Bow to include mainly working on coral biogeochemistry, but also some time for me to show them my mangrove field area and to introduce Derek to the real world of microbial muck. Our trip down was smooth. Dave and Chris were certified scientific divers working on examining corals and their symbionts to determine when bleaching events occurred. Their research determines the quantitative role that the symbiotic dinoflagellate, Symbiodinium, has on whether corals exist as autotrophs or heterotrophs.
Every few days, we would go off shore or near another coral island, so they could collect samples for later experiments and isotope measurements. Derek and I were responsible for staying in the boat and figuring out when and where the divers would surface. One particularly choppy day just off shore Carrie Bow, we waited anxiously for the dive “balloon” to surface so that we knew where they were. That particular day, Chris was to hold on to the balloon, but he forgot to attach it to his wrist. I was concerned that our propellers would hit them as they surfaced. Derek was concerned that as we drifted, we’d end up on the reef.  We drifted about 100 m from the divers, but learned some important boat safety and gained some confidence. Baker and Freeman were pretty surprised when they surfaced and saw the boat quite a distance from them.
Baker was interested in studying the effects of nutrient additions to coral’s symbionts. His field areas included Australia’s Great Barrier Reef, Panama, Florida, Mexico, and now Belize (Baker references). Chris Freeman, a grad student at the Univ. of Alabama, studied the microbial aspects of coral symbiosis. With their coral collections, Dave  and Chris set up a series of experiments with small 5 cm pieces of a couple of coral species that were incubated in temperature controlled pools on Carrie Bow. Each morning and evening they measured dissolved oxygen levels in their experimental bottles to determine respiration and photosynthetic rates.
At night we also extracted chlorophyll from corals and measured nutrients. At the end of a long day, outside under the stars, we had a glass of One Barrel rum. One evening, I introduced the gang to Panty Rippers, a favorite of Mat Wooller. Two parts coconut rum and one part fruit juice of your choice. Shake with ice and serve. Although much more palatable to me, the others were rather foggy the next day. Henceforth, they stuck to plain rum.
Baker and Freeman also targeted rouge lionfish, invasive species that escaped from aquaria over the past 25 years. Lionfish are native to the Indo-China region where they are top carnivores. In the Caribbean, they are decimating native fish populations altering the trophic structure of coral reefs. As Dave and Chris collected their coral samples, they speared lionfish if they could, collecting over 100 fish. Lionfish have very poisonous spines, which need to be carefully removed before preparing them to eat. The daily chore of Baker and Freeman was to prune the spines before handing them to chef Martha.
I was treated to the thrill of seeing “my” mangrove trees again. I took the group to all of the major sites I’d published on. With Derek, we waded through an interior pond with 1.5 meters of microbial soup, a thick gelatinous mass of anaerobic microorganisms, many of which were purple sulfur bacteria. One day we traveled to one of the other coral islands so they could dive to deeper waters looking for corals with unusual types of Symbiodinium. The boat was anchored near a steep dropoff going from a shallow 2-3 meters to about 25 meters depth. Dave and Chris donned their scuba gear, dropped off the side of the boat, checked the anchor then descended.
Derek Smith and I were instructed to turn the engine on and rev it a few times if we wanted them to return. Meanwhile, Derek and I donned snorkeling gear and took off to see the shallow underwater sights. As an experienced tropical researcher, I was 150 meters or so from the boat and surfaced periodically to check to see where I was in relation to the boat. I saw Derek back on board and wondered why he’d returned so quickly. The boat seemed about 200 meters away, so I started to head back. It took me longer than I thought to return, because unbeknownst to me the boat was adrift. The anchor had come off the bottom and was now dangling in deep water. We were headed straight to Honduras! After I boarded the boat, we started the engine, revved it up, and waited. We tried for 30 minutes to alert our divers to no avail. We continued to drift, then circled around far from our original mooring. Without the quick thinking of Derek, we might have been set adrift with no way home.
at August 07, 2019