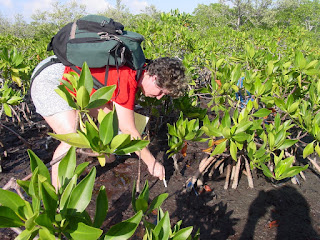 Returning to the States after a couple of weeks on the cayes required a lot of planning. On one of our trips returning from Dangriga, we took a short flight on a small Belizian airlines back to Belize City. The pilots were on the young side, and it was unclear whether these small planes were flying by sight or guided by navigational instruments. Midway, while going in and out of clouds, the plane swerved suddenly to the right. We looked out our window to see another similar aircraft about 50 m away from us making a similar evasive move.
After that “adventure” we decided to go by car or truck. Local Dangriga guys had a larger truck to transport tourists’ gear to Belize City. Once, they took Mat Wooller early in the morning up to the Belize airport, while the rest of flew. Apparently, as soon as they were underway, a bottle of local moonshine was cracked open and passed around. Mat, not wanting to be aloof, took a sip or two, later reporting that this was the foulest drink he’d ever consumed. Part of the highway had been washed out during a storm. While driving on this rough section of road, the truck--now traveling at a high rate of speed--hit a bump, and half our gear and samples flew out of the truck onto the road. By this time, the driver was too impaired to make sure everything was loaded back in. Mat saw that everything made it back in the truck, fortunately. He never wanted to get stuck with that chore again.
When we arrived at Miami International Airport, we reported to Customs officials and the USDA to declare our specimens. Fortunately, because they were all marine plants and sediments--not crop plants or soils--the US Dept. of Agriculture was not concerned. Only once did Customs officials question us seriously. We had to convince them that our computers, small instruments, and chemicals were purchased in the United States, rather than Belize. Being an older woman, I used my persuasive skills to get Customs folks to back off and let us into the country.
Thorny Collaborations
This research started innocently and optimistically, but soon moved into a complex realm that challenged in the field, in interpretation, and in the laboratory. While I developed a collaborative team with many people for the Biocomplexity project, I also had one of the more contentious collaborations with Feller, McKee, and Lovelock. Early on in the project, when we told Feller and Lovelock our surprising results about the isotope values from grid samples, they were not impressed. In fact, Candy remarked, “That’s nothing. We’ve seen that before.” Postdocs Wooller and Smallwood felt deflated. And I was surprised at the reception they’d received. I was under the impression that we’d found something exciting. This was the start of a period of distrust on both sides.
As we grew more experienced with mangrove ecosystems, our group grew concerned that the fertilization experiments were contaminating the rest of Twin Cayes. With time and careful sampling, we learned that the fertilization experiments affected a much greater portion of Twin Cayes than just a few trees---probably at least 100 meters from the experimental plots depending on the location. With time, we learned that the fertilization experiments were not causing the unusual nitrogen signals we measured in remote places. I never recovered good communication or collaboration with half the biocomplexity team after the initial negative encounter that Mat and Barbara had. When the project officially ended, the collaboration was over---one of the most difficult in my career.
Conversely, the work I did with Wooller, Quinn Roberts, and Val Brenneis (a high school teacher who worked part time in the lab) from Carnegie with Myrna Jacobson, Barbara Smallwood, and Isabel Romero from USC, and John Cheeseman from Illinois was some of my most fun and productive research. When Mat moved to Alaska, he brought down his some of his students, Greta Mycherchin, Natalie Monacci, and Stephanie Gudeman. We had uproarious times in the field.


I loved starting a new line of research into a field that I knew very little about before diving into it with only limited knowledge. Invariably, the quest for knowledge became a fascinating scientific journey, made more fun and interesting working with early career scientists and new collaborators.  Together we could see what very small additions of nutrients from fertilizers can have on mangrove ecosystems which had the potential to change food webs and perhaps how these ecosystems will adapt to higher sea levels and climate changes.
Working with like-minded people who foster creativity and curiosity is essential for sustaining a long scientific career. The study of mangrove ecology and paleoecology turned into a 10 year course of study. I still have volumes of unpublished data that need to be turned into scientific manuscripts, a chore that I hope to make progress on once I’m officially retired.