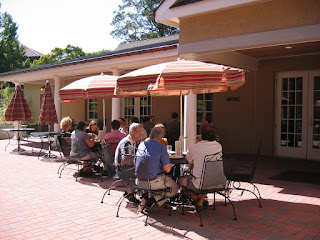 For 72 years, Carnegie scientists have cooked and served lunch to their colleagues on the Broad Branch Rd. campus. I joined the Lunch Club with then postdoc Paul Koch, now Dean of Science at UC Santa Cruz. We tried eating at local restaurants, but they were not very good and too expensive. In 1991, we were the first Geophysical Lab guinea pigs to mingle with DTM folk. We recall that some of those cooks were not the best: some served spaghetti on Monday, reheated noodles on Tuesday, old noodles with a tuna fish glue-like sauce on Wednesday, the same noodles with margarine on Thursday, and for a real treat—hot dogs on Friday.  Some of the worst cooks were some of the more famous scientists, but that wasn’t strictly true.
“There arose during these early postwar years a social curiosity at DTM which deserves the description unique, something easily regarded as of minor consequence but which has done much to shape the Department's character, something widely admired but never copied. In the fall of 1947--the exact date escaped recording--a few members of the bio group, tired of driving away for lunch or bringing it from home, devised an alternative. One of them would prepare a simple, hot lunch for all, buying the ingredients, caring for kitchen and table, and continuing these services for a week, then to be relieved by another. Others outside bio joined, and it proved to be an excellent way to keep persons in disparate lines of research informed and to share scientific gossip. (Director Merle) Tuve had a kitchen installed in the Standardizing Magnetic Observatory, one component of which was a then new dishwashing machine, without which it is doubtful that this kind of activity could have survived.” Louis Brown, DTM Staff Member, 1997

I put together a Lunch Club cookbook for the 60th anniversary. Steve Shirey and I wrote an article summarizing the history and nuts and bolts of Lunch Club for that volume. When the Geophysical Lab move to the BBR campus in 1991, Lunch Club was held in the instrument shop in the Experiment Building (the pre-renovation name of the Greenwalt Building). From 1992 to 2006, we cooked our meals in a renovated basement kitchen in the Abelson building with an adjoining deck hosting a sweeping view of Rock Creek Park. Because we were preparing meals in a building with offices, smells from cooking wafted into upper floors where administrative staff worked. When a cook roasted a turkey or mixed up a pasta sauce, there were no complaints. But when a cook burnt her/his meal or used too much garlic, someone would come down stairs and demand that two large exhaust vents be turned on full force.
Many visitors and guests were fed at the Lunch Club. If a visitor resided more than a couple of weeks, she/he often pitched in a cooked a meal or two. Students and postdocs had the chance to talk informally with a National Academy member, a Presidential Medal of Science winner, a famous Trustee, a department director, or a scientific staff member. Lunch Club has served as the informal gathering place for integrating the labs and their disparate scientific endeavors for over 70 years.
Long term staff members and technical support staff took turns as Lunch Club “Czar’. As Czar, you scheduled the cooks, purchased cutlery and plates, which disappeared fairly regularly, and kept records on attendance, in particular cooks:eat ratios—the number of times one cooked vs. how often someone ate. Food was purchased by the cook, and it was tradition that others who were not in Lunch Club did not eat the food in the kitchen unless they were expressly invited to do so. About twice a year, packages of cookies or even a whole ham disappeared sometime in the night. The Czar was responsible for writing a global email reminding people on campus that the food belonged to the cook, not the campus.
The importance of the science often discussed at Lunch Club cannot be understated. While, by Washington standards, political discussions are tepid (due no doubt to the political homogeneity of the scientific staff), the science is varied and significant. Monday’s GL and Wednesday’s DTM seminar speakers can be found at the table with those wishing to continue the seminar topic. Most postdocs not already so inclined, learn how to be interested in the science of those working in other fields. This can be a lifelong lesson in how to talk science at a different level.
Many prospective club members were put off by the thought of cooking for a week. It can be difficult, but as with anything in life the main question is simply whether it is worth the hassle. Obviously for members the answer is yes. In 2007, Steve Shirey and I wrote up some tips from long-serving Lunch Clubbers. Use the schedule to your advantage. Do not plan to cook when you have an abstract, manuscript or proposal deadline, a critical lab experiment or right before an important talk. If these things come up, switch the week of cooking with someone else. If the thought of a full week of cooking is too daunting, find a like member and split up the weeks so each only cooks two-three days in a row. Do not plan meals with too many complicated steps. These look great in recipes for four but when multiplied in quantity by 5-6 times, they take too long to prepare. Do not fret about taking the time away from work to cook. For postdocs in particular, a stint at CIW on a fellowship marks the transition from a user (e.g. student) to a provider (e.g. professor) so starting to learn how to provide as a Lunch Club cook is not a bad thing. Shop at inexpensive places.

Lunch is served Monday through Friday at 12:30 pm SHARP. The timing of lunch club is one of the harder things to get right, but with time, it becomes second nature.
One of the principal rules: No complaining about the food or the cook!
Lunch usually consists of the following:

Main Dish: Either with meat or vegetarian. Hot Dogs can be served no more than once per week.

Salad with dressing: The cook provides the salad dressing.

Bread: Typically 2-3 loaves of French bread works for each lunch. If you make spaghetti or soup, three loaves is better than two.

Fruit: LC members like bananas. They also eat a lot of grapes, oranges, and strawberries. They occasionally eat apples, pears, and kiwis.

Cookies: LC folks love anything chocolate. They will eat anything sweet, but chocolate chip cookies go faster than oatmeal ones. A freshly baked dessert is always a treat—package mixes of Brownies are very popular.
at August 08, 2019