The good of a dog


A black and white Korean mutt stands next to my wheelchair asking to be petted. She lays down in close proximity, ears alert, then settles in for a short nap. Stella, Evan and Meghan’s dog, just by being herself provides happiness and peace. Of course, when she leaps up barking ferociously at a neighborhood cat or the mailman, Stella is slightly jarring—a bit annoying. She is a very clean dog, never peeing or pooping or throwing up in the house, but she sheds fine white hairs that layer onto black clothing. A dog is a dog with its fine parts and its downsides. But I’ve always loved dogs!

My friend Franny and I were dog “nuts”. When we were 7 or 8 years old, we kept scrapbooks of dog pictures scavenged from Life and Outdoor Life magazines that our parents read. Life magazine had the cutest pictures of puppies. Outdoor Life, a hunting and fishing magazine that my father read, had pictures of pointers and beagles. Franny and I were both lucky to have parents who brought puppies home for us to grow up with.

My family had boxer dogs—rowdy, slightly dumb dogs, that slobbered all over, but delivered serious amounts of fun to my brother and I. Our first boxer Rex unfortunately didn’t last long. He was discovered by our mailman and his death was quietly murmured in the family. I was too young to really understand. Our next boxer lived to a ripe old age. Rudy, a stocky male with a curbed tail and floppy ears, was a constant presence in my life from early childhood until my freshman year at Penn State. We loved him and he loved us.

Rudy was often a bad dog, however. He chased one of our neighborhood kids and knocked him over whenever he saw him. He jumped through our living room window breaking the glass as he went to chase an “invading” cat. He devoured all of my mother’s Christmas cookies one year, when she’d left them cooling, unguarded in the kitchen, while the family decorated the Christmas tree in the living room. He pulled on his leash every time you walked him. He bolted out the door, not to return for a day, whenever he got the chance. 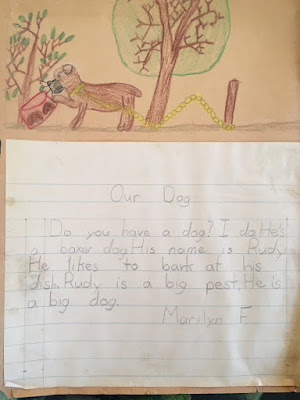 Rudy provided comedy relief with these antics. He was a co-conspirator of my brother and I when we were fed fried liver and asked to clean our plates. Rudy would slink into the kitchen when my father finished his meal, then we’d slyly feed him the offending leathery meat. Rudy was our alarm clock. Every morning, he’d dash into our rooms and jump on our beds giving us a taste of his slobbery kiss. He loved to play, race around the house, and roughhouse. He was a great dog for me.

Franny, who had the cutest beagle and a fluffy cocker spaniel, and I formed the Dog Club of America. We were its founding and only members. We considered others, but didn’t really admit anyone else to our club. I recall that we had a secret password and danced around a tree hopping on one foot and professing our love of dogs.

Rudy died when I was in college. My mother couldn’t bring herself to call me, so she wrote a letter. When I opened it in the college dining area, I slumped down to the floor and cried. Rudy had been sick for a while—it was his time. I learned then the deep sorrow that comes from loving a dog. A friend of mine said, “There’s nothing worse than losing the family dog.” And that’s true, the devotion to a pet, like a long-lived dog, runs deep.

As a young adult I had two great dogs—Bummer, a large well-trained German shepherd, and Sputnik, a small mutt who became my companion when I sorely needed one. Having a dog as an adult means you need to find a place to live that allows pets. You can’t just leave home and forget about them—they need constant care and attention. Sputnik died after Chris and I left her in a kennel when we went on a trip to Alaska. I returned home to a very sick dog in time to kiss her goodbye at the vet’s office. I was four months pregnant at the time, which was a relief. One dog gone and one precious daughter born soon after.

We lived a dog-less life for a while because commuting, working, and day care were too complicated. Finally, when she was in 5th grade, daughter Dana insisted that all she wanted for Christmas was a dog. While I was thinking of all the reasons why we couldn’t have one, Dana, Chris, and Evan found Australian shepherd puppies for sale. That was it. We chose the shyest one—a black, white, and brown “Tri” colored Aussie that we named Nicky.

Nicky wasn’t the cuddliest pup. Sometimes she nipped at Evan. Often she hid under the bed or in the shower and wouldn’t play with the kids. Eventually, though, she became the loyal family dog keeping tabs on the kids’ whereabouts. She never ran away from home. We needed no fence to keep her on our property. Nicky was a one-family dog though and eschewed being petted by anyone other than our family. She defended our home fiercely, once biting a friend who unwittingly came in the door while we weren’t in the room.

She traveled with us everywhere a dog could go—Canada, the beach, my parents house, you name it. Like many dogs, when she saw the suitcases come out, she’d sit by the door or jump in the car and sit waiting patiently to go along and not be left behind. Nicky died of kidney failure after only 11 years with us. It was Evan’s first loss of a pet. Chris, Evan, and I drove Nicky to the vet’s for her to be put “asleep”. We came home and held a funeral for her with Evan’s friends and neighbors that included a lot of tears and a couple of beers. Dana was graduating from college in Washington state the day after, so she missed the sad parting. She and Evan made a memorial to Nicky a couple days latter on a deserted Pacific beach.

Chris and I are dog-less again. But we’re grandparents of Stella. When we come from Mariposa to Riverside, Stella shows her fondness, wriggling and wagging, and follows us like honored family. I’d like another dog. We’ll see. Maybe one will come our way and provide that loving touch that is unique to a dog.

Other dogs I have known:

My brother’s dog Lucky—a golden brown Chiua-what-what mix that my sister Barb found at a 7-11 in New Jersey. Lucky ate shoes, glasses, and expensive furniture, but he was responsible for capturing the heart of my sister-in-law Linda.

Paul Koch has another Chiua-what-what named Aaron. In a recent visit to our house, Aaron pooped on the carpet, bit one of our guests on the leg, and walked on the kitchen table, all in the first hour of his visit. He’s a dog with a strong Napoleon complex.

My sister and her husband Tim got a huge, untrained German shepherd named Cooper, after their son Chris died. Both Cooper and Chris caused a lot of problems, but both were lovable in their own way.

Franny’s dog Jammer was an elite competitive fly ball star. Jammer kept Fran on the move taking the dog nationwide to compete by jumping and flying through the air. When Jammer became blind, Franny could use voice commands to direct him to a ball she’d thrown.

There are many others. A dog keeps you from being “too clean”, “too fussy” and “too self-centered.” I’m glad they’ve been in my life. heH