“Remember, ‘don’t yuck my yum’,” my daughter Dana scolded me on the phone this week. “We’ll see you at around 6 pm tomorrow.”

I had been telling her about something going on in my life, I don’t recall now what, but her phrase stuck with me.

My Millennial daughter and her Boomer mother often talk at cross purposes with each other. Talking about problems in society—even when we agree on the problem—can be tricky. As a Boomer, my goal is often to “solve the problem” where her thoughts trend towards understanding different perspectives. Fortunately, we are both liberal and left-leaning, but our strong willed nature can complicate things.

When Dana and her fiancé George arrived, she said, “Me and George are going to help put up Christmas lights this weekend.”

George, listening, piped up, “I learned to say ‘George and I’ not ‘me and George.’ Isn’t that correct?”

Dana quipped, “Language is changing! Don’t yuck my language yum. That could be elitist.”


I know this conundrum personally, having been recently embroiled in a debate between Boomer science women and Millennial science women about the use of “me and so-and-so…” in a public scientific conference. I have given this plenty of thought, discussed it with other Boomer science women, and decided to stick my neck out with this blog.

We have much to learn from each other.

In my field of isotope biogeochemistry and earth science, there were very few women when I earned my PhD in 1977, perhaps only 10% of us were women. For 30 years earlier in my career, I was the only woman on the Geophysical Lab’s senior scientific staff of 15. Having weathered that difficult time, my strong personality formed because I needed to be a fighter to keep going. There were no female role models. And there was essentially almost no diversity within women science colleagues my age.

Women in science, especially the physical sciences, have not reached parity. Recently at a faculty meeting, our Dean noted that it would take 12 years at the rate UC Riverside is hiring to reach a ratio of 50:50 women to men—a hiring pathway that is unrealistic and short-sighted, as well as ignoring other under-represented groups.

Today, we recognize that diversity extends well beyond gender—race, ethnicity, disabilities, gender identification, social status—are some of the identities that are as important today as just being a woman. The Boomer women scientists I hang with are all well aware of this new push to promote diversity. Until I started as a professor in 2013 at an Hispanic serving institution at the University of California Merced, I didn’t have a great opportunity to do much about the wider diversity issue. After almost 9 years immersed in this culture, I understand more what needs to be done. I think it is too early to tell how diversity, inclusivity, and equity (DEI) thinking will change scientific culture.

What will we see in the next 5 years?

Boomer women will largely be out of the workforce. But like me, a retired Boomer, we can still contribute. Our experiences, while somewhat limited, still chronicle what it took for us in a world where goal-oriented, competitive, and disciplined traits were critical for success. My work ethic remains strong. Dealing with ALS has forced me to continue to be resourceful, disciplined, and mentally focused, or I would have retreated to a shell waiting for disability to over take me.

I would like to continue to mentor. My rhinoceros-hide days are gone, however. I am very sensitive to negative energy.  Adding an “R” for respect to DEI is a new goal: DEIR. I hope to no longer “yuck your yum.” I’ll need help to do this with the sensitivity that is required to work with a broader group of scientists in need of encouragement to enter the important work of making new discoveries, changing scientific and academic culture, and changing how we judge and evaluate each other. 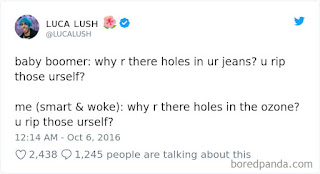 Millennials are right to question the status quo of the hierarchy that they are joining. Social change isn’t easy—and it’s been noted that we Boomers didn’t accomplish what we set out to do when we were in our twenties and thirties. An appropriate work-life balance is often more important to younger scientists than an academic position at a research-based university, where it is expected that you devote 6-7 years of working your ass off without much time for family building or personal growth. In my opinion, this must change.

We’ve got to work together to support the whole person, someone who will promote DEIR during their career and life. I hope to remain in touch with Millennials—and any others—to effect change and to work on DEIR, and will try as best as I can to respect others as much as I can.

Email ThisBlogThis!Share to TwitterShare to FacebookShare to Pinterest
Labels: Career Challenges, Don't take yourself too seriously, Women in Geoscience