Going down the shore--the Jersey Shore


Growing up in suburban New Jersey back in the ‘50s and ‘60s, it was hot and sticky in summer—before air conditioning and hanging out in the mall. A trip to the shore brought cool mornings, comfortable evenings, and hot afternoons swimming in the Atlantic Ocean. Spending some time, any time, on the Jersey shore was an adventure for a kid. All of us growing up there can probably recall our own special way of “going down the shore.”

Together my Polish grandmother and I would board the train or a Greyhound bus on a sultry summer morning in Camden for the voyage to Atlantic City. As we got closer to the shore, she would enthusiastically say, “Take a deep breath and smell the salt air!” when the first whiff of rotten egg from the salt marshes wafted into our nostrils. When we reached the terminal, we’d grab our grips, her word for small suitcases, and walk to the Fredonia Hotel on Tennessee Avenue.

“Shrink down!” she would whisper as we would approach the front desk. My grandmother, Helen Hencinski, was a regular there in the 1950s and early sixties. The Fredonia gave reduced rates to children under eight, and Grandmom Hencinski wanted to save as much money as she could to maximize our fun. Sam Metz, the manager back then, was probably on to Grandmom’s charade, but he played along with it because he loved her business and her company.


With Grandmom, you knew you’d be heading down to the beach with a towel tucked under your arm around 11am. She’d bring down ripe Jersey tomatoes for that first day’s lunch along with a packet of salt, a juicy fresh peach, and maybe a hard-boiled egg. Afternoons were spent swimming with a crowd of people clustered near the lifeguard stand. As a youngster, I spent most of my time in fairly shallow water, jumping over waves, getting sacked by the bigger ones that thumped loudly on the shore break. Often, she had to call me out of the water to “rest.” When I got a bit older, I took long walks along the beach looking for shells and daydreaming about what life would be like as a teenager.

By 4pm, we’d pack up our beach bag and towels and head back to the Fredonia. On the first floor, there was an outdoor shower for washing the sand off your feet and out of your bathing suit. We’d then trundle up to the second floor lobby, past the main desk (with me shrinking down), and up to our little room. My parents footed the bill for these trips, so we always had a room with a bathroom, two twin beds, and windows that opened up to let a breeze come in. We’d both shower then get dressed up for an evening on the Boardwalk!

Grandmom Hencinski, on the plump side, was robust with dyed reddish brown curly hair, glasses, and a fashion sense that included flowered dresses with big necklaces and brooches. She had one gold tooth in the front and a smile that won over any room she entered. Before heading out, she’d drape a white cardigan sweater over her arm, grab her pocketbook, and say, “Let’s go!” Before leaving the hotel, we spent a half hour on the Fredonia’s second story screened porch where the geriatric crowd spent their time on rocking chairs, gossiping and swapping stories.

At 5:30, we’d head out. Our first stop was the downstairs taproom at the Fredonia. The two of us would walk in and promptly the bartender would shout,

We’d sit at the bar, me drinking a coke and she ordering a “short” beer. Until I was much older, I thought a short beer was a large pint-sized glass, but learned later that Grandmom was treated to a much larger beer than she’d ordered because all bartenders loved her. After polishing off that first beer, we often stopped at another establishment with the same joyous reception before heading onto the Boards.

The boardwalks of the Jersey shore are legendary. There is nothing formal or fancy about them. They exude fun, junk food, and pleasure.

They are noisy—not just the waves pounding the shore, but people talking, laughing. Popguns were shot at carnival games where bells rang and people shouted when they won or lost. Barkers stood outside of businesses enticing people to come in.

You see people of all ages, all styles, and all races.

We’d then choose a place to eat. Pizza was my preferred meal, but sometimes we ate clams or burgers. Restaurants were always over crowded and loud. Service was typically slow as college-aged waiters and waitresses scurried to take your order. Grandmom Hencinski would often fill her pocketbook up with sugar packets, jelly samplers, and pats of butter on little cardboard squares. She’d wrap up any leftovers in napkins, making sure she had a healthy supply for the next day’s lunch on the beach.

And sometimes, if the check didn’t come to the table fast enough, she’d say, “Why don’t you go outside for some fresh air?” She’d come sailing out a few minutes later, grab my arm and hustle me off. It wasn’t until I compared notes with my brother Fred that we realized she was “walking the check”—meaning skipping out on paying the bill. When we got older, we’d not leave the restaurant until the bill was paid, safely keeping our grandmother out of prison. 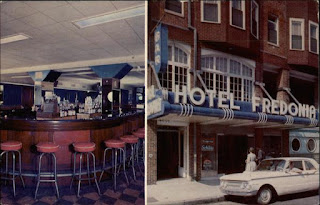 The tap room and entrance to the Fredonia Hotel

After dinner, you’d walk. In Atlantic City, the boardwalk had motorized and hand-pushed carts for people to ride. We’d be treated to a ride once during the trip, feeling like Rich People while passing by those poor people on foot. The guys running the carts would bellow, “Watch the chair!”—a phrase that was part of the Boardwalk’s melody.

Atlantic City had its piers, including the iconic Steel Pier and the Million Dollar Pier that held amusements and rides. Once during each of our trips, I was treated with going on the Rides—bumper cars, roller coaster, Ferris wheel, and the haunted house ride. Grandmom Hencinski also loved to play just about every carnival game she encountered. I remember her picking up softballs and chucking them at the targets—without, once again—paying for them! The barkers would yell, “Lady, lady, you can’t do that!” It never stopped her. On occasion, she’d plunk down a quarter to play legitimately and usually won a prize. I had a roomful of stuffed animals that she’d won from carnival games on the Boardwalk.

By 9:30 pm, we’d head back to the Fredonia, tired, laughing, taking in the last excitement of the day. These trips lasted only a few days, before getting back on the train or bus to Camden, and home to suburban, quiet Moorestown.

As we both got older, we were joined by my mother and brother. We then stayed at Debbie’s Motel in Wildwood, thought to be a step up from the Fredonia Hotel in more urban Atlantic City. Before Grandmom passed away when I was 13 years old, we’d shifted to renting a small house on Long Beach Island, where there was no boardwalk. There, on rainy afternoons as a pre-teen, she taught us how to play pinochle (and how to pass cards with our toes under the table) and cautioned me to stay away from “Wolves”, teenage boys who were up to no good.

Grandmom Hencinski was larger than life. I hope I inherited a few of her renegade traits. Those trips with her are precious memories.

Everyone who grew up in New Jersey has a shore memory special to him or her. Take a trip down your personal Memory Lane and enjoy where it takes you. If it’s the Jersey shore, I know what yuze is talkin’ about.

Email ThisBlogThis!Share to TwitterShare to FacebookShare to Pinterest
Labels: Don't take yourself too seriously, Early memories, Growing up in Jersey, Remarkable Women