“Your boyfriend is the guy with the cape?” I exclaimed. Postdoc Carmen Aguilar (https://uwm.edu/freshwater/people/aguilar-carmen/) joined my lab in 1993 to work on a project studying the effects of rainfall laden with potentially polluting nitrogen on coastal ecosystems. Carmen, a PhD student of Ken Nealson’s, had been at the Lab for only a couple months. She’d mentioned her boyfriend was coming to town.

He walked into my office wearing his characteristic flowing cape with a parrot perched on his shoulder. I recognized him immediately from Ocean Science meetings. Russell Cuhel was known throughout the oceanography community as a hippie microbiologist with an encyclopedic knowledge about phosphate in the oceans.  Invariably at the end of someone’s talk, Russell gave a mini-lecture based on this knowledge using colorful language. I also associated him with young female oceanography groupies, certainly not my postdoc.

Carmen introduced us and I could tell she was proud of her boyfriend and his notoriety. The parrot, Amigo, chattered while we talked. I learned to take this unusual couple at face value. They were a cute duo and devoted to being scientists. Carmen and I developed a working relationship fairly easily. A buxom woman, Carmen, wore snazzy clothes, flashy jewelry, and carries herself with flair. Her curly mane of long, black hair had to be tied back when she wielded the gas-oxygen torch to seal up samples. She knew little about stable isotopes, but readily mastered the now old-fashioned vacuum line techniques we used back then. In retrospect, Carmen mastered every complicated procedure that she encountered—she loved processing samples, organizing the lab, coming up with ideas, and paying attention to details.

Together we worked with Hans W. Paerl (affectionately called Hog Waste Paerl for his work on that subject) at Univ. of North Carolina’s Institute of Marine Science. Hans, an extrovert of major proportions, and I had been working together for almost 5 years at this time. There was a respectful push and pull between us—the collaboration worked. Carmen was to spend half her time in North Carolina and was responsible for setting up the series of oceanographic cruises. We’d planned to go to the central part of the North Atlantic Ocean known as the Sargasso Sea, part of the dreaded Bermuda Triangle.

Carmen loved being at sea!

“To the ship! To the ship!” she would pronounce, as she packed up the chemicals and supplies for our journeys. Together we filtered thousands of liters of seawater stationed in an alcove adjacent to where samples were brought on board the deck of the R/V Cape Hatteras, our home-away-from-home for this study. When we crossed the continental shelf through the Gulf Stream, the seas got pretty rough. I always took the drug scopolamine before embarking, so I was never seasick. Carmen learned after one of our first voyages to do the same.

In 1994, it was my turn to be Chief Scientist, which was my first time in that role.  I was able to invite Russell Cuhel (https://uwm.edu/freshwater/people/cuhel-russell/) and David Hollander (then at Northwestern University) to join our scientific “party.” It was fortunate to have Russell on board, as his experience in rough seas was quite helpful. This particular cruise was filled with high adventure.

In my first meeting with the Captain, I laid out my cruise plans to stop on station every 100 kilometers to sample the water column. The captain looked at me with slight derision, then remarked that he used nautical miles, so what did 100 kilometers mean in nautical miles? I was put in my place. With my tail between my legs, I retreated, converted units, and then proposed we stop every 54 nautical miles until we reached the center of the Sargasso Sea. After only one day at sea, seriously rough weather began to affect our sampling. Some of the scientific party got seasick. By late afternoon on the second day, our ship was required to “standby” to assist a sailboat with a snapped main mast, as the Coast Guard came to their rescue.


By the end of that day, the Captain informed me that Hurricane Gordon, previously thought to have gone into the North Atlantic, had changed direction and was projected to intersect with our cruise track within 24 hours. We decided to head back to Beaufort rather than risk collision with the storm. I was disappointed.

When we reached port, those who had been seasick were relieved to be off the rolling ship.  By next morning, the weather report showed that the storm had gone “safely out to sea” again, so we were cleared again for departure. Only half the scientific crew—the hardy ones—me, Carmen, Russell, and Hollander-- returned for the second leg of the voyage, but we left the dock in a hearty mood.

Our strategy now was to compare the measurements we’d made before Hurricane Gordon to those taken after the storm had churned up surface waters. It wasn’t long before Gordon reversed course again, and turned back towards our ship. We made it out just to the edge of the Gulf Stream around 9 o’clock at night.

Waves were crashing over the bridge--three stories up. The Captain, himself was looking grim and said to me in his thick Southern accent, “Marilyn, we’ve got to turn around.”

Lashed with a rope to the deck of the ship, I staggered outside in the wind and rain to collect that last sample, Station 17. As I came inside, I radioed to the bridge, “Ok, let’s go in.” Refrigerators, the scintillation counter, and freezers were flung back and forth like billiard balls. All of us were ordered to our staterooms, while the Captain was lashed to the ship’s controls.

Years later, I can still feel the drama that made us a captive ship in a huge storm. Was it worth it?  Not many people have the chance to sample before and after a hurricane. Once we were safely back to port, we had the sense that Hurricane Gordon provided us with a unique scientific opportunity.

Now, owing to global warming, hurricanes are more intense than they were 25 years ago. This year there have been more hurricanes than there are letters in the alphabet! Hurricane Zeta just pummeled Cuba and Florida. Based on what I learned back in 1994, I’ll bet the sediments and deeper waters have been thoroughly churned up in the Caribbean and coastal Atlantic Ocean. Working on oceanographic ships during hurricanes isn’t normally done, so our fortuitous adventure was insightful. 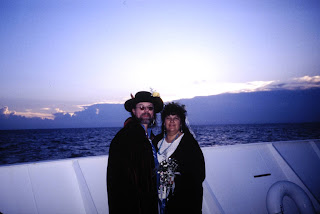 On one of our final cruises in September 1995, as luck would have it Hurricane Marilyn intersected with our cruise track! Hurricane Marilyn wreaked havoc in the Virgin Islands, before taking off for the central Atlantic’s Sargasso Sea. Fortunately, we were able to dodge it without too much trouble. Much more importantly, Carmen and Russell, now firmly a part of our work, were married at our most distant Sargasso Sea station.

The wedding took place in the late afternoon into early evening. We gathered on the foredeck of the ship. Our normal T-shirts and shorts were replaced by dresses for the women and pants and button down shirts for the guys. The captain presided; I served as Carmen’s Matron of Honor, and the first mate, as Russell’s Best Dude. Even though alcohol was forbidden on the ship, we had special permission to have one bottle of champagne. Carmen found the largest bottle I have every seen. They are still married and as close as they ever were.


On that same cruise, I invited three young scientists who now are leaders in the geochemistry field. Tim Filley (https://www.eaps.purdue.edu/filley/), then a postdoc at Carnegie, wanted shipboard experience. He spent his time setting out zooplankton nets, processing the samples, and picking the cyanobacterium Trichodesmium from surface tows. His work was either on the back deck or inside the main lab. I remember him working hard, dealing with queasiness, and soaking up the experience.

Mark Teece (https://www.esf.edu/faculty/teece/) had just arrived in the US to start a postdoc studying stable isotopes in sugars, fats, and proteins. A Brit from the Univ. of Bristol, the close camaraderie on the ship fit his personality perfectly. Mark helped out Dave Hollander with his sediment sectioning. The pair were jokesters, regaling the rest of us as we worked through deep ocean sampling. Mark was used to a more formal British atmosphere. The cruise opened his eyes to the greater informality we have in the US.


Ben Van Mooy (https://www2.whoi.edu/staff/bvanmooy/) was just graduating from Northwestern Univ. and worked in Hollander’s group. Ben was one of those interns who I knew upon meeting him that he was destined for a superlative career in science. On this cruise, his first, he measured carbon dioxide concentrations in seawater samples. Even today, his work takes him to the Sargasso Sea!

Subsequent cruises revealed that the very tiny phytoplankton we filtered were primarily Prochlorococcus sp., found in nutrient poor ocean waters globally. This plankton was stimulated to grow by nitrogen and phosphorus, substantial constituents of continental rainwater source. On land, acid rain might be problematic, but in the open ocean, “fertilization” by atmospheric deposition could be a good thing. The widespread occurrence of Prochlorococcus sp. was just being discovered, and at that time, its importance in ocean productivity, particularly in oligotrophic areas, was unknown. In 2020, our work is even more relevant for understanding the effects that major ocean storms may have on marine primary productivity as our climate changes.

Today Carmen and Russell are studying the invasive quagga mussel (https://issuu.com/waterstrategies/docs/oct_muni_2018/s/33597) an organism that is impacting California’s waterways.


“It only takes one idiot,” Russell says. The two are working hard to educate the public to take care—wash that boat, clean the motor, because once these beasts invade, they make themselves at home as pests you can't get rid of.

Carmen continues to stand out as a scientist with deep passion for her work. The journeys that she and the other young group of postdocs and scientists has taken has touched many lives. They’ve created new knowledge that back on those pitching Sargasso Seas was something they’d hoped for.