Get your ass out of bed! AMASE call for action

The sun never sets in Svalbard in summer. It travels in a 24-hour circle in the sky not quite reaching directly above and of course, never dipping below the horizon. The 24-hour daylight was good for long working days, but the AMASE scientific team had a tendency to stay up to all hours of the night –like 3 or 4 am, then difficult to arouse for the 7:30 am breakfast call. I was usually one of the first of the scientific team to wakeup and go to the mess hall for a cup of coffee. This was a quiet time to chat with the crew, the cook, and the captain. I would wander into my “lab”, maybe finish off an analysis or two, and then see who had come for breakfast. Often it was only one or two others. 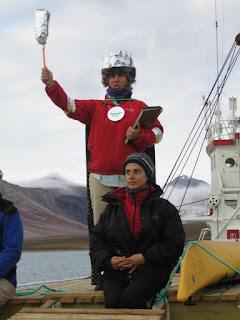 I became the unofficial alarm clock, knocking on all stateroom doors, opening them up a few inches, and shouting, “Get your ass out of bed!” I wrote some lyrics sung to the tune of The Star Spangled Banner: “Get your ass out of bed, or you’ll wish you were dead, cause what’s coming up next is Morton upside your head!” Morton, a senior deck hand, was a giant, strong, irreverent Norwegian man well over 6.5 feet tall. On our first trip with him, he thought we were a bunch of sissies. When he took us ashore in the zodiac boat, he made a point of ramming it hard onto the shoreline. He delighted in picking us up and squeezing us in bear hugs. When our voyage was over and we were back in Longyearbyen, Morton consumed many shots of aquavit and sought us out for “loving” torture. We’d worn down that brusque behavior, and by the 2nd year, we all welcomed each other with gusto. By our third voyage together, I treated his injured, infected toe in my role as Chief Scientist and First Aid provider. When the captain heard of this, he was puzzled why a scientist would treat a crewmember. He eventually learned on AMASE, we were one big Arctic family.
Breakfast consisted of a spread of Norwegian cold cuts (meats), rather bland cheese including geetoast, a molasses colored sweet cheese spread, blood sausages (delicious), tomatoes, cucumbers, and occasionally fried eggs. At every meal, we were presented with smoked fish products in bowls or in tooth paste-like tubes that you squeezed onto thin, unsalted crackers. There was always bread, jams, and peanut butter to supplement the meal. As the AMASE team straggled in, the level of conversation grew with excitement for the field day ahead.
A small management team of Hans, Steelie, Liane Benning, Pan Conrad, and I met briefly at 8:30 am, often on the bridge to coordinate with the crew. Then, we piled down to the “day room”, where we met informally, worked on computer data, and in general hung out. Hans Amundsen outlined the daily plan and decided who was going where, with whom, and when.  Steelie served as Chief Scientist once we received NASA funding. Typically there were two to three teams going to places for science sampling, discovery, or instrument testing. Each team was assigned a safety person, which was Hans, Ivar, or one of us who had successfully shown we could hit a target with a rifle. The AMASE photographer, Kjell Ove Storvik, was assigned to one of the teams. After this brief meeting, we scrambled to our labs loading our day packs with supplies, making sure we had sufficient warm clothing for all types of weather, and then packed a lunch, hot tea or cocoa, and assembled on deck with our survival suits on ready to board a small boat heading to shore. Once on shore, we unzipped the bulky orange suits, put on our boots, checked our rifles, radios, and flare guns, shouldered our packs and set off.
Because of the eternal daylight, teams often stayed out for 12 or more hours if the field area was remote or if we were conducting timed sampling or difficult measurements. Most often, teams called for pickup around 6 pm, in time to stow samples on board ship, and change for dinner. Depending on the cook, dinners were a highlight of the day. Before embarking from Longyearbyen, we had all stopped off at the liquor store and packed in wine, beer, and the occasional bottle of gin or aquavit. Generous “senior” scientists often brought a bottle of red wine to the dinner table to share. We discussed the day’s exciting discoveries, commiserated over broken instrumentation, and argued about all sorts of topics in astrobiology, space science, and NASA-ESA relationships.

After dinner, everyone went to their labs and began the evening analytical sessions. I assembled nutrient assays, extracted rocks, labeled and dried samples, wrote more detailed field notes, uploaded data to my computer and graphed it, and thought about the next day’s work. Others tweaked their instruments, fixed broken power supplies or cables, took spectra, and wandered between labs sharing samples and ideas. By about 11 pm, some called it a day and went to bed, others assembled on the deck with another beer, or headed to the upper deck to bask in the makeshift hot tub on the R/V Lance. It was a tricky time of day. When Norwegians take the cap off a whiskey bottle, they typically throw it out, meaning that the bottle is passed around until it’s empty. Sometimes it was a challenge to keep things “between the navigational beacons” so to speak. What happens in Svalbard stays in Svalbard.
at August 13, 2019

Email ThisBlogThis!Share to TwitterShare to FacebookShare to Pinterest
Labels: AMASE Adventures, Astrobiology Adventures and Science, Don't take yourself too seriously