I've had great mentors and learned how to be one


Mentoring wasn’t something that happened overtly when I was “growing up” in my career. Dr. Peter Given at Penn State was my first mentor. He was thoughtful in just about every way: provided an opportunity to do research in his organic geochemistry lab, taught a great course, and helped me get into a good graduate school. I kept in touch with him until he passed way in 1988. He was instrumental in promoting my career by inviting me to give a presentation on my work with isotopes in hot springs at a Gordon Conference in 1982. In hindsight, he mentored me for well over ten years!
My Ph.D. advisors at the University of Texas were “silent” mentors. I may sound oblivious, but I wasn’t really aware they were paying attention to me until after I’d gotten my degree and arrived at the Carnegie. Their mentorship was more behind-the-scenes sort of advice, subtle encouragement, and unity in seeing I advanced when I was ready. They wrote a lot of letters of recommendation for me when I was looking for my first job after a postdoc. Chase van Baalen died fairly young, but Pat Parker mentored me until he died in 2011, making trips to DC almost every year. That’s well over 30+ years of mentoring! One of his classic lines in regards to the life of a scientist, “You’ll never be rich, but you’ll be comfortable.” His insight into mentoring grad students: “You can teach ‘em to read and write, but they have to think on their own.”
Tom Hoering was my next mentor. I’ve described him throughout my writings. His style was to sit back and observe, then offer his opinion when he thought you needed it. Oft times, I didn’t like his opinion, but by this time, I was thinking on my own, so to speak, and listened but kept my own council. By the time he passed away in 1995, we co-mentored each other. It was a good back and forth relationship that worked for both of us. I picked up the reins of Senior Mentor at the Geophysical Laboratory from him in the early 1990s.
The Directors of the Lab also provided mentorship, albeit they were also bosses and it was their job to guide you. Hat Yoder had the heaviest hand, editing abstracts and manuscripts with an active red pencil. Charlie Prewitt was a collaborative mentor, working to develop my skills as a senior scientist. Wes Huntress mentored me with respect to gaining leadership skills. Carnegie President Maxine Singer mentored when you needed her to. Her famous phrase “Half measures never work” inspires me even today. DTM’s Director Sean Solomon provided sage advice as I considered leaving the Carnegie in 2012.
From all these good people, I developed my own style of mentoring. I like to get to know people. I’ve learned that a person’s life outside of work can have a dramatic influence on their work in the lab. In fact, young scientists’ careers these days are shaped as much by their family situation as they are by their work situations. The two cannot be separated. The theme of work life balance has become a buzzword that we scientist write about with varying opinions.
Should young scientists work on weekends? Late at night? More than 50 hours per week? When should they have children? Should they move with their spouse? Should they get married? Is it OK to have a relationship in your own lab? How much is private vs. public knowledge?
Combine that with the more typical questions early career scientists have. Am I good enough? Do I really have what it takes to get a Ph.D.? Do I want an academic career? Is my advisor an asshole or just tough? Is this enough to publish? What happens when my paper’s rejected? 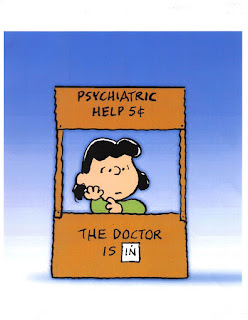 Starting at the Carnegie, I had a “shingle” outside my door “The Doctor is IN” with a picture of the Peanuts cartoon character Lucy Van Pelt. I kept phone numbers of therapists and psychiatrists in my desk, referring out mentees when their needs exceeded my training. A box of tissues was stationed at the corner of my desk in case tears came—something that happened more than I would have liked. The best was to politely ignore the tears, while sliding the tissue box within reach. At the University of California, I learned about student health services, Title IX officers, and local therapists of potential use. Colleague Seth Newsome recommended having a stuffed animal to hand to a distressed mentee.  A small cute wombat has been passed to many a person, who calmed down stroking the little beast’s fur.
At both UC campuses, I served as official and unofficial faculty mentor. It’s one of my more important jobs. Usually a quick chat solved most small problems. The major points of discussion centered around two topics: managing graduate students and tenure. These required ongoing, frequent conversations, often lasting a couple of hours. My strategy was to allow as much time as needed—ignoring emails and other distractions, with the exception of teaching. Without question some of the most important work I’ve done was to mentor students, postdocs, and early career scientists to be happy and productive in their life and their work.
Now, mentoring is front and center in the academic world. It’s fully recognized now that one mentor is not enough. You need many mentors to guide through complex maze of scientific life. I call on my colleague Mary Droser, who has the sage advice of someone who’s navigated UC Riverside politics for decades. And most importantly, I rely on my husband who provides the day-to-day advice that I need to make the decisions facing me as I ease into retirement. How fortunate I am to have the support and to be able to give the support to others.